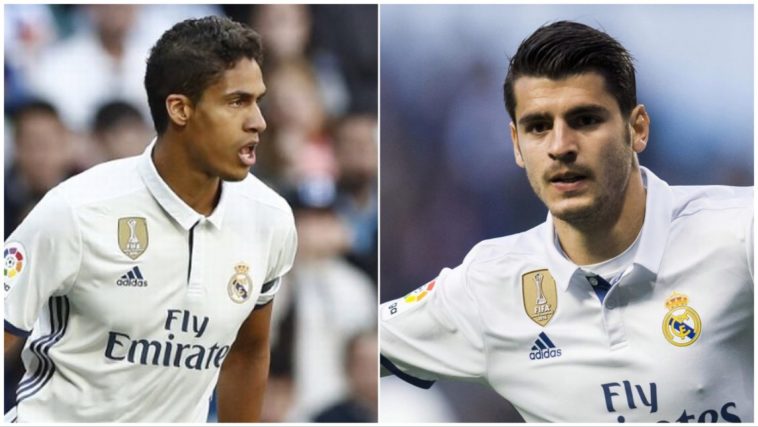 Manchester U tied manager Jose Mourinho is thought to want to sign players in four key positions this summer, a center back, left back, central midfielder and a striker, in an attempt to make progress in their sixth place finish in the Premier League this season.

Reports today suggest that Jose Mourinho wants to raid his former club Real Madrid to sign two player that he knows very well from his time at the Bernabeu.

Sky Sports reported today that Raphael Varane is one of four options that Mourinho has identified to partner last year’s summer signing Eric Bailly in the heart of Manchester United’s defence.
Burnley’s Michael Keane, Benfica’s Victor Lindelof and Southampton’s Virgil van Dijk are also thought to be on the Portuguese’ radar.

On Thursday, news broke that Manchester United have cooled their interest in Antoine Griezmann as they want to focus on a more suited number 9.

One player who has been linked today who would fit this bill is Alvaro Morata. Morata was given his debut by Jose Mourinho at Real Madrid, and the Man Utd manager is believed to be a big fan of the striker.

The Spain international is keen to move away from the Bernabeu to gain more game time ahead of next summer’s World Cup. Chelsea and AC Milan are also believed to be interested, with the Italians currently the favourites for his signature.

All of this news could be linked into the future of David de Gea. De Gea is believed to be happy at United, but is once again the subject of intense speculation following renewed interest from Real Madrid.

A move for the duo would not come cheap. Varane is rated at around £60m, while Morata would command a similarly high fee. United are thought to have rejected a £60m bid from Madrid for De Gea. Could a swap deal be on the cards?