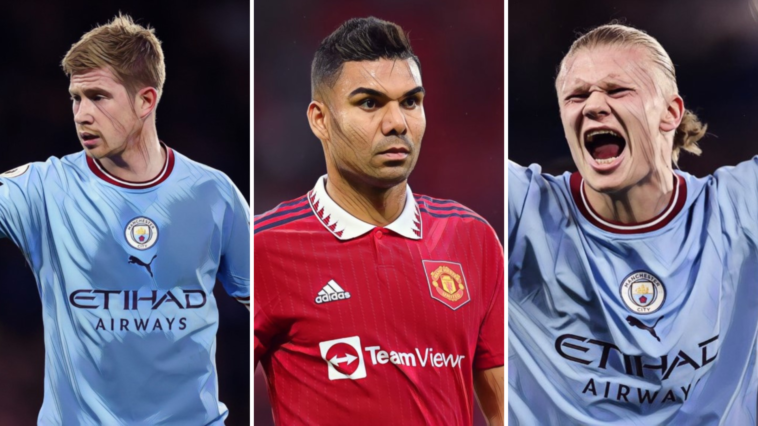 Mancunian rivalries resume in the Premier League this weekend as Manchester United take on Manchester City at Old Trafford.

It promises to be a fascinating clash as the two rivals go head-to-head, with Manchester United in fine form after a run of nine consecutive wins in all competitions. City, however, have been the division’s dominant force in recent seasons and scored ten goals across two Manchester Derby fixtures last season.

Ahead of their latest meeting, we’ve attempted to create a combined Manchester Derby XI.

Ederson’s contribution to Manchester City’s modern success can not be understated, with his unique brand of goalkeeping a central part of Pep Guardiola’s plans.

Often regarded as the best goalkeeper in world football with the ball at his feet, his comfortability on the ball provides City with another option in their possession dominant approach. His kicking is the greatest weapon in his armoury with the Brazilian boasting a booming kick of unerring accuracy.

Ederson’s passing range can resemble the division’s top midfielders on occasion and his arrival from Benfica helped usher in an era of success at the Etihad. He has won four league titles in five seasons and has claimed the Premier League’s Golden Glove on three occasions.

One of the finest right-backs of the Premier League era, Kyle Walker had the unenviable task of replacing crowd favourite Pablo Zabaleta at the Etihad.

Fast forward five-and-a-half seasons and Walker has picked up nine major trophies and four league titles, with the England international an irreplaceable presence for City. His evolution under Guardiola has been remarkable, from a buccaneering attacking full-back to a complete defender whose role is altered dependent on the opposition.

Whether it’s utilising his pace to cover on the counter attack or stepping into midfield to create overloads, Walker has passed each challenge Guardiola has presented him with. Diogo Dalot has shown huge improvement at Manchester United this season, but Walker remains a benchmark for Premier League full-backs.

Barnsley might not be the first location that springs to mind when discussing stylish, ball-playing defenders, but John Stones has forged a reputation as one of England’s finest since his emergence at Oakwell.

Since signing for Manchester City, via a spell at Everton, Stones has gone from strength to strength. He’s won four league titles among his honours and has proven an ideal defender in Pep Guardiola’s system, with his calm under pressure and ability to move the ball confidently through defensive lines.

Across the past two seasons Stones has produced the most consistent form of his career, with his display in last week’s win at Chelsea evidence of his status as one of Europe’s best centre-backs.

The term ‘Rolls-Royce defender’ is perhaps often overused when discussing centre-backs with silk, but the reference applies here.

From one centre-back of elegance to another, Raphael Varane is the first Manchester United player to break up the dominance of Manchester City in this XI.

Varane signed for the Red Devils with a stellar reputation after a decorated career at Real Madrid, one which saw the Frenchman win three La Liga titles and four Champions League trophies.

Fitness issues disrupted his debut season in the Premier League, but he has shown his quality this time around to form an excellent partnership with Lisandro Martinez.

Old Trafford tonight 😍😍 Next round !! pic.twitter.com/Ugktmhtzxo

There’s an effortless class to Varane’s defending, whose aura of calm has been a major factor in the improved chemistry of United’s new-look backline this season.

Luke Shaw’s return to form has been a huge positive for Erik ten Hag’s improving team, but it’s Joao Cancelo who makes our combined side at left-back.

Cancelo’s completeness has been well discussed, with the free-floating full-back given licence to impact games across the pitch. Whether it’s surging runs forward, moments of ridiculous technique, or trivela crosses, there are few defenders as watchable as Cancelo when he’s firing on all cylinders.

After a recent dip in performances, City will hope Cancelo can return to his brilliant best ahead of a crucial period in the campaign.

For the first time in a long time, Manchester United have a midfielder capable of stamping his authority on games.

Casemiro arrived with a huge reputation during the summer, though there were initial doubts over the £60m fee and length of contract for a player who will turn 31 next month. The Brazilian has quashed any reservations with a number of stand-out performances, demonstrating the ability which has seen him shine as one of world football’s best enforcers across the past decade.

The five-time Champions League winner has been an authoritative presence in the United side, stopping and starting attacking moves with combative challenges and an exquisite passing range.

Casemiro has been doing a bit of 𝐞𝐯𝐞𝐫𝐲𝐭𝐡𝐢𝐧𝐠 for Manchester United 🔑 pic.twitter.com/QglW1XfmLj

Already a firm favourite at Old Trafford, ‘Classemiro’ has been the midfield general the club have craved for several seasons.

Rodri features alongside Casmeiro in our two-man midfield pivot, having evolved into arguably the best defensive midfielder in world football under Pep Guardiola.

A crucial cog in the Manchester City machine, Rodri is both tenacious and technical and has the physical frame to impose himself on Premier League midfields. The Spain international excels in and out of possession, regaining and recycling the ball as City overwhelm sides with a monopoly of the ball.

Rodri’s game by numbers vs. Chelsea:

Last season proved a career-best campaign for the 26-year-old, who scored seven league goals and had the highest pass completion rate of any midfielder in the Premier League (91.8%).

No player has had more touches or made more passes into the final third than Rodri this season, with the Spaniard the conduit of the City side.

Kevin De Bruyne continues to place himself in the conversation of the Premier League’s all-time greats, with his body of work adding weight to his argument as one of the division’s best midfielders.

De Bruyne has been one of the pillars on which Pep Guardiola has built one of the most successful sides of the Premier League era.

He has won four league titles, been named as the PFA Player of the Year on two occasions, and has provided a staggering 95 assists in just 227 Premier League appearances – only four players have ever managed more.

Starting off the year with a big W! 💪🏼 pic.twitter.com/4r92UEjNIw

A footballer of sublime talent and vision, he has so often been the star-turn in a team packed full of world-class names.

Pep Guardiola’s patient approach with Phil Foden’s development has been worthwhile, with the City boss having nurtured the Stockport starlet into a game-changing talent.

Foden’s potential has been obvious from an early age, but he has evolved into a player capable of influencing games of any level and from any position. Whether from the right, left, centrally or in midfield, Foden finds a way to impact games with vision and poise.

Technically gifted and intelligent, he is a four-time Premier League title winner and does not celebrate his 23rd birthday until May. A fifth title could follow this season for Foden, who has been named as the PFA Young Player of the Year in consecutive campaigns.

Marcus Rashford is in the form of his life right now and will be the man that Manchester City must stop in this weekend’s derby clash.

Rashford has scored 15 goals in all competitions this season, including seven in his last six games. After a difficult 18 months that saw him struggle for form and fitness, he has been a player reborn during the current campaign and has averaged a goal or assist every 88 minutes.

The 25-year-old is on course to reach 20+ goals for a third time in four seasons, with a career-best campaign probable at his current rate. It’s been a welcome sight for Manchester United to see the academy product back to his electric best.

Perhaps the easiest selection on the team sheet, Erling Haaland might just make any combined side in world football right now.

The Norway international has broken record after record since arriving in the Premier League last summer and more are set to tumble before the end of the current campaign. He has scored an astonishing 21 goals in just 16 league appearances this season and is, remarkably, already just three short of Fernando Torres’ Premier League record for the highest-scoring debut season from a foreign footballer.

That landmark should be passed in a matter of weeks and Haaland will have his sights set on chasing down Mohamed Salah’s single season record (32) for a 38-game season set in 2017/18.

After a hat-trick in his first Manchester Derby appearance, he will be relishing a first cross-town encounter at Old Trafford.