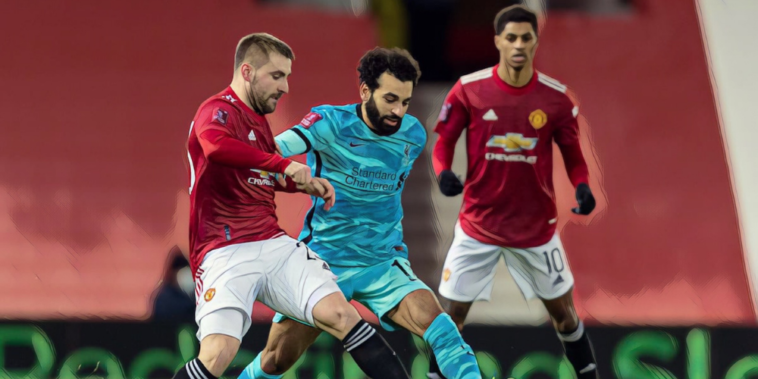 The clash could have huge consequences for both sides with Liverpool desperately needing three points to keep alive their hopes of securing victory and Champions League qualification, whilst victory for the Merseysiders could officially end United’s faint title hopes should leaders Manchester City win at Crystal Palace.

Ahead of a high-stakes encounter between the north west rivals, we’ve looked at both squads and combined our best XI from the players available for selection this weekend.

Alisson edges out Dean Henderson and David de Gea for our goalkeeping position despite a below-par season from the Brazilian number one, Liverpool’s usually impregnable shot-stopper having made a series of high-profile errors during the current campaign.

That said the 28-year-old remains one of the world’s best at his finest and will hope to bounce back from a difficult period, having previously led Liverpool to the division’s best defensive record in each of the past two campaigns.

Alisson’s competition for his place comes from the duel threat of David de Gea and Dean Henderson, though the latter is yet to truly convince despite ousting the Spaniard from the side in recent weeks.

Another player whose form this season makes this a more difficult selection than it once was, though Trent Alexander-Arnold remains one of the best attacking full-backs in the division.

The 22-year-old has scored twice and provided five assists in the Premier League this season, whilst he leads all players for crosses and ranks highly for key passes with 54 for the season so far.

The defensive side of his game undoubtedly needs work however, and this weekend’s clash opens up the debate on which aspect of the game is more pivotal for a leading full-back, the forward threat of Alexander-Arnold up against the defensive brilliance of Aaron Wan-Bissaka.

Liverpool’s centre-back injury crisis makes this an easy selection at the heart of our combined defence, with Eric Bailly selected over teammate Victor Lindelof.

Bailly’s struggles for fitness have been well-documented in recent seasons but when available has proven an ideal partner for Harry Maguire, the Ivorian’s athleticism and recovery pace a perfect complement for the less mobile Maguire.

Liverpool loanee Ozan Kabak has improved immeasurably since a shaky start after arriving from Schalke, but it’s Manchester United who dominate our centre-back pairing.

Harry Maguire partners Bailly at centre-back in this season, the Manchester United captain an ever-present for his side and the leader of Ole Gunnar Solskjaer’s improving team.

Maguire’s world-record price-tag brought both huge pressure and scrutiny, but even with his flaws there is no doubting the England international has improved the Red Devils’ backline since arriving from Leicester.

The 27-year-old ranks amongst the division’s top five players for aerials won and % of aerial duels won, whilst only two players have a greater progressive carrying distance, highlighting his ability to step forward in possession.

Harsh on Luke Shaw who has enjoyed the best season of his career at Manchester United, but despite form favouring the Red Devils’ left-back we’ve sided with Liverpool’s Andy Robertson.

Robertson has been the benchmark for full-backs over the past two seasons and ranks amongst the most complete players in his position, a determined defender with endless energy and quality when in the final third.

The Scotland captain has reached double figures for assists in each of the past two seasons and has five for the current campaign, whilst his nine big chances created is behind only Alexander-Arnold and West Ham’s Aaron Cresswell amongst Premier League defenders this season.

One of the few Liverpool players to have come out with much credit from a disappointing season, Fabinho anchors our combined midfield with the Brazilian remaining one of the best in the business when it comes to screening the back four.

The 27-year-old has featured for much of the season at centre-back and performed admirably, but Liverpool’s finer performances have come with their enforcer back in the engine room.

Fabinho’s ability to snuff out opposition attacks and assured passing from deep has seen him establish himself as one of the world’s premier holding midfielders.

Paul Pogba’s talent has never been in question despite the midfielder polarising opinion, but extracting the best from the France international on a consistent basis has proven more difficult.

At his best however, the 28-year-old is a player capable of stamping his influence on proceedings and a fine run of form over the winter months reemphasised what Pogba is capable of.

Ole Gunnar Solskjaer has utilised Pogba in a free-roaming role off the left of late and it is a position which the star has shone on occasion, the World Cup winner edging the reliable Georginio Wijnaldum and Thiago Alcantara for a place in our side – the latter’s Liverpool career yet to catch fire following his summer arrival from Bayern Munich.

Manchester United‘s main man was a certainty to feature in this combined side, a player who Liverpool reportedly looked at before his move to Old Trafford from Sporting Lisbon in 2020.

Fernandes has been nothing short of a revelation since arriving into the Premier League and has spearheaded the Red Devils’ improvement this season, scoring 26 goals across all competitions and providing a further 14 assists.

No PL player has more goal contributions in all competitions than Bruno Fernandes ❄️ pic.twitter.com/bS8CCUIYCU

Much has been made about his record against the ‘big six’ this season, but Fernandes will be the player Liverpool are most fearful of this weekend.

Mohamed Salah’s remarkable goalscoring consistency has continued this season with the Liverpool star remaining one of the finest forwards in world football, his goal against Newcastle last weekend taking the Egyptian to 20 in the Premier League this season.

It’s now 93 league goals in just less than four seasons for Salah since arriving on Merseyside, with the winger currently one behind Harry Kane in the race for the Golden Boot.

Securing that accolade would make it three Golden Boot awards in just four seasons for Salah, whilst he would join Alan Shearer and Thierry Henry as the only players to ever win 3+ trophies – further cementing his status as one of the Premier League’s best.

This selection has most certainly gone on previous exploits over current form with Sadio Mane having nosedived during the current campaign, last season’s Premier League Player of the Season looking a shadow of his former self this term.

Mane, however, has been one of the world’s best wide players in recent seasons and at his best can prove almost unstoppable, a blend of electric pace, movement and endless energy to hassle opposition defenders.

The Senegal international shades selection here over Marcus Rashford, who despite an impressive haul of 20 goals in all competitions this season has struggled for consistency in his overall performances.

Edinson Cavani has proven this season that there remains plenty left in the tank for the veteran, making a mockery of the accusations his free transfer arrival was a panic-buy last summer.

The Uruguayan’s intelligent movement and clinical finishing have added a new dimension for Manchester United this season, with the 34-year-old scoring 12 goals in all competitions despite spells on the sideline through injury.

Diogo Jota is unfortunate to miss out and undoubtedly deserves a mention following an impressive first season in Liverpool colours, though Roberto Firmino’s indifferent displays mean he has fallen down the pecking order for our combined side.