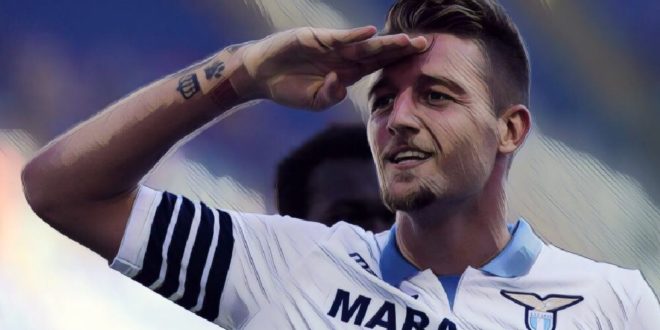 Ole Gunnar Solskjaer is looking to add to his midfield options this summer, with Ander Herrera having left to join Paris Saint-Germain and major doubts surrounding the long-term future of Paul Pogba.

Milinkovic-Savic has now emerged as a key target for the Old Trafford club, with the Serbia international having emerged as one of the finest midfielders in Italian football during four seasons in Rome.

Sky Sports Italia are reporting that Manchester United will soon make a bid of £72 million (€80m) for the 24-year-old – who has also been linked with a move to Juventus –  although it is claimed that Lazio want £90m (€100m).

The 6ft 3in player would add quality and presence to the United midfield, having scored 22 goals in 125 appearances since moving to Serie A from Belgian side Genk in 2015.

The big-money arrival of the Lazio star could spell the end of Pogba’s Manchester United career. The 26-year-old has made no secret of his desire to leave Old Trafford this summer, with the Frenchman having been strongly linked with a move to Real Madrid.