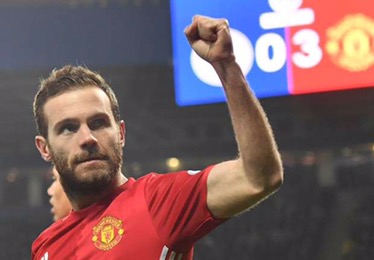 Manchester United playmaker Juan Mata has turned down a mega money move to the Chinese Super League according to reports.

The Spaniard has less than 12 months remaining on his current deal at Old Trafford and had been widely tipped to leave the club following the arrival of Jose Mourinho in 2016. However, to his credit, he has worked hard and is one of the first names on the team sheet. His current contract has the option to extend for a further year.

The Sun claim that representatives from an unnamed Chinese club visited Manchester last month to deliver an offer which would have seen Mata more than double his current £170,000-a-week wages. The offer to try to tempt the 29-year-old to China would see him earn a staggering £375,000-a-week AFTER tax!

A source close to Manchester United told the paper:

“Juan was offered a sizable amount of money to go to China. They were visiting last month and made it to his reps.

“He sees his future here though and is determined to stay. He hasn’t got long left but the option on his contract will almost-certainly be taken up.

“The club don’t want him to leave on a free next summer. He is represented by his dad and has been pushing for a longer-term deal.”

Mata is also leading a campaign where he is trying to get footballers to donate just 1% of their salaries to charity.