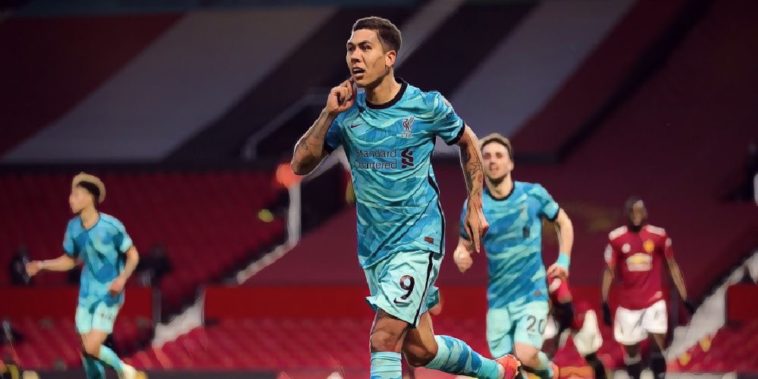 Manchester United host bitter rivals Liverpool on Sunday, with the two sides heading into the game on contrasting runs of form.

Here’s everything you need to know about that crunch clash at Old Trafford:

The Red Devils will head into this weekend’s meeting off the back of a dismal run of league form, with their last victory in the competition having come away against West Ham United on 19 September.

Since then, they’ve dropped points in three successive games, losing to Aston Villa and slipping to a draw against Everton, before arguably their worst performance of the season saw them slump to a 4-2 defeat away at Leicester City last time out – ending their 29-game away unbeaten run in the league.

United had taken the lead in that clash with the Foxes through a Mason Greenwood stunner, before some poor defending saw Youri Tielemans and Caglar Soyuncu score either side of the break to make it 2-1 heading into the final ten minutes.

While the returning Marcus Rashford drew the visitors level, Solskjaer’s men then suffered a late capitulation to walk away empty-handed, with Jamie Vardy netting almost straight from the kick off, before summer signing Patson Daka rubbed further salt into the wounds with a fourth in stoppage time.

United did manage to bounce back in midweek, however, after coming from two goals down to produce a stirring second-half comeback to edge past Atalanta in the Champions League, with Cristiano Ronaldo once again the matchwinner after powering in a late header.

As for this weekend, despite their recent poor run, a win would see them move just a point behind their rivals in the table, although they will likely have to make do without centre-back star Raphael Varane once again. Anthony Martial is also a doubt after returning from the international break with a minor injury.

Unlike their rivals, Liverpool have been in scintillating form in recent months, with the Merseysiders extending their unbeaten run to 21 games in all competitions after seeing off both Watford and Atletico Madrid in the past week.

Saturday’s trip to Vicarage Road saw Jurgen Klopp’s men spoil the party in what was Claudio Ranieri’s first game in charge, as a Roberto Firmino hat-trick and another Mo Salah wonder goal helped the visitors secure a comfortable 5-0 victory.

The footwork is magical, the finish is sublime.

He had the Watford defence on strings! 😱 pic.twitter.com/tBWPWWOxeX

Having been at their blistering best in that thumping win, the Reds were forced to produce a more dogged display to edge past Atletico on Tuesday evening, as they emerged 3-2 winners in a hugely entertaining encounter in the Spanish capital.

The away side had raced into a two-goal lead through Salah – who became the first player in the club’s history to score in nine consecutive games in all competitions – and Naby Keita, before returning star Antoine Griezmann netted twice in quick succession to make it 2-2 heading in at the break.

The Frenchman then set his own unwanted record by becoming the first player in Champions League history to score a brace and also be sent off after he was dismissed for a high challenge on Firmino, with Liverpool going on to secure the win late on as Salah added his second from the penalty spot following a ridiculously needless challenge by Mario Hermoso.

That ‘dirty’ victory – as described by Jurgn Klopp – continued their 100 per cent start to the group stage, while it also condemned Diego Simeone’s side to a first home European defeat for four years.

As for this weekend’s clash at Old Trafford, it remains to be seen whether midfield duo Curtis Jones and Thiago Alcantara will be available, after both missed the trip to the Wanda Metropolitano, though there are no new injury concerns.

The two sides last meeting came at the back end of last season, with the game crammed into an already packed schedule after the initial fixture had been called off after United supporters had gained access to Old Trafford in protest at the Glazer regime.

That had left Solskjaer’s men playing four games in the space of just a week, although the hosts made a bright start as Bruno Fernandes’ deflected effort fired them ahead, before they were somewhat fortunate to see referee Anthony Taylor overturn his initial decision to award Liverpool a penalty for a foul by Eric Bailly on Nat Phillips.

The visitors responded superbly, however, and went in ahead at the interval courtesy of goals from Diogo Jota and Roberto Fimrino, with the Brazilian then adding his second of the night just minutes after half-time.

Marcus Rashford pulled a goal back with just over 20 minutes to play, albeit with their rivals going on to wrap up the win in the final minute through Mo Salah – with the victory keeping their Champions League hopes alive and ensuring a first win at Old Trafford for Jurgen Klopp as Reds boss.

What channel is Man Utd v Liverpool on?

UK and Irish readers can stream, or watch, the match on Sky Sports Premier League.