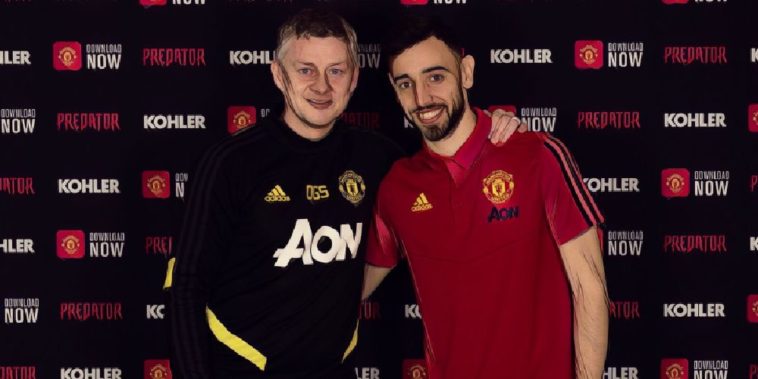 Manchester United have finally completed the long-protracted transfer of Bruno Fernandes from Sporting Lisbon, a deal that could be worth up to €80 million.

Having allowed Ander Herrera and Marouane Fellaini to leave the club over the course of 2019, Manchester United were unable to bolster their midfield over the summer, and the subsequent long-term injuries to Paul Pogba and Scott McTominay have left the club desperately short of options and creativity in the middle of the park.

However, the capture of Fernandes – who arrives from on an initial deal worth €55m – certainly should go some way to filling the creative void in Ole Gunnar Solskjaer’s side, the Portugal international having registered a hugely impressive 105 goal involvements (63 goals and 42 assists) in 134 appearances for the Primeira Liga side.

United confirmed that the 25-year-old had signed a five-and-a-half-year deal until 2025, with the club retaining an option to extend it by a further 12 months.

Speaking to the club website following his high-profile switch to the Premier League, Fernandes claimed that he has been ‘a big fan’ of the club since the days that compatriot Cristiano Ronaldo’s ruled the roost at Old Trafford.

📂 We'll file this under things we love to see 😎 pic.twitter.com/fIV9p2ijuB

“My love of Manchester United really started when I used to watch Cristiano Ronaldo play and ever since then I have been a big fan of this great club,” Fernandes said. “For me to now play for Manchester United feels incredible, I have worked hard to get to this moment and I can promise the fans that I will give everything for the badge to help bring us more success and trophies.

“I want to thank Sporting for everything they have done for me. It is surreal to hear the nice words that have been said about me from players that used to play for this team.

“A massive thank you to Ole and everyone at Manchester United for the trust they have shown in me and I can’t wait to start to repay that on the pitch.”

Fernandes is in line to make his debut for the club in Saturday evening’s game against Wolves at Old Trafford.

United also confirmed the departure of Marcos Rojo today, the Argentine returning to his homeland on loan to play for Estudiantes, the club where he started his career.

The Old Trafford outfit are thought to still be interested in adding a striker to their ranks in the remaining 24 hours of the transfer window.