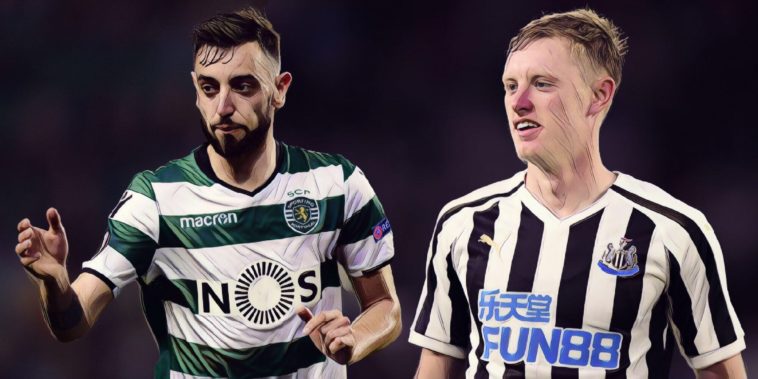 Manchester United are said to be confident in their attempts to bring Bruno Fernandes and Sean Longstaff to the club this summer according to reports.

The Old Trafford outfit are keen to bolster their midfield this summer after what was a disappointing campaign which saw them finish in sixth after a miserable run of form at the end of the season.

Marouane Fellaini and Ander Herrera have already left, while there are serious question marks over Paul Pogba’s future at the club, with the £89 million openly admitting that he is keen to have ‘a new challenge somewhere else’.

Fellow midfielders Nemanja Matic and Fred also endured disappointing campaigns last season, with academy graduate Scott McTominay seeming to be one of a few players who could look back on 2018/19 with his head held high.

Manchester United have been linked with a plethora of midfield operators this summer, and the strongest links have been around Sporting Lisbon’s Bruno Fernandes and Newcastle‘s Sean Longstaff.

Fernandes – valued at €70m by Sporting – averaged a goal or an assist in every league game last season, scoring 20 and providing 13 assists in his 33 league appearances last season, and has been linked with a whole host of Premier League clubs, including Liverpool, Spurs and Man City.

Meanwhile, Longstaff – who has been likened to Michael Carrick – enjoyed his breakthrough season under the outgoing Rafael Benitez last season, starting eight league games before his season was cut short in early March through injury, with a £25m bid thought to be enough to encourage Mike Ashley into a sale.

With a deal for Aaron Wan-Bissaka set to be announced imminently, the Evening Standard are reporting that Manchester United are ‘confident’ of wrapping up two further deals as they continue their summer overhaul.

Ole Gunnar Solskjaer’s side fly out to Australia next week for the first part of their pre-season tour, and the report claims that United are hopeful that both players are able to join them for their trip down under – even though no official bids for either player have actually been submitted.

Meanwhile, a report on Friday in the Times claims that United are still interested in Leicester’s James Maddison, although the Foxes are not thought to be keen on a sale.

The final piece of United’s jigsaw is likely to be the addition of a centre-back, with the Red Devils having been linked with Harry Maguire, Kalidou Koulibaly, Samuel Umtiti, Matthijs de Ligt and Ruben Dias this summer, to name but a few.