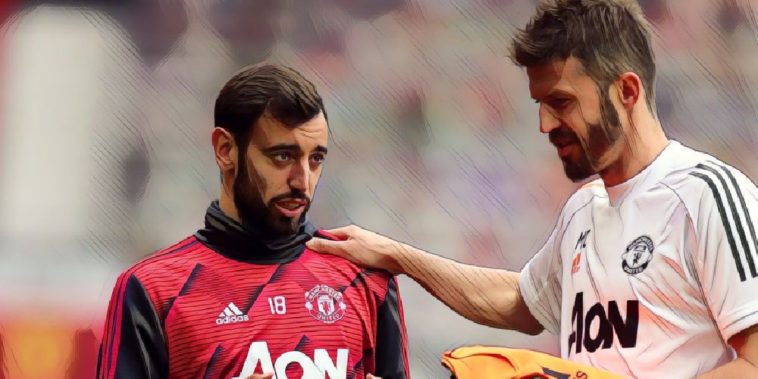 Manchester United playmaker Bruno Fernandes has revealed that Michael Carrick still hasn’t lost his ability to pick a pass, admitting he is looking to learn from the former midfielder.

Carrick spent 12 years at the base of Manchester United‘s midfield, pulling the strings and collecting a plethora of trophies along the way, including five league titles, the FA Cup, Champions League, Europa League and two league cups.

The 39-year-old hung up his boots back in 2018, moving into the club’s coaching set-up under Jose Mourinho, remaining in the role following Ole Gunnar Solskjaer’s appointment.

However, it seems as though Carrick hasn’t lost his ability on the ball, with current United playmaker Bruno Fernandes revealing that his coach ‘didn’t miss a pass’ after joining in a recent training session, and admitting he is looking to learn from his ‘clever’ coach.

“Today, I was watching in training and Carrick was playing – maybe there was one player less, and some of the players in the last first XI are in recovery – and I was watching Carrick, and he didn’t miss a pass,” he told the UTD podcast.

“It’s unbelievable how fresh and sharp he is doing the exercises with us, and I was talking with Fred and I was going to say to him, hey, watch him playing and do the same, but I thought it was unfair and so I didn’t say it! But it was amazing – if someone from outside come to watch training, nobody would say this guy isn’t playing in the team.

“He’s a player who has that quality of passes and also when we need to do some finishing or passing exercises, he’s always there helping us with the balls. I’m learning a lot from him and he’s one of the people I like to listen to, because he was a big player, he won a lot of trophies for the club and for me you have to learn from these players.

“Carrick and [Portugal’s] Joao Moutinho are the sort of players from whom you can learn how to be smart in the game, how to be clever. Maybe they’re not the sort of players that kids will watch and say, I want to be like Michael Carrick, but when you have one in the team, you know that guy will never miss a pass, you know he will do the smart pass, most of the time will make the right decision, and you need these kinds of players.”