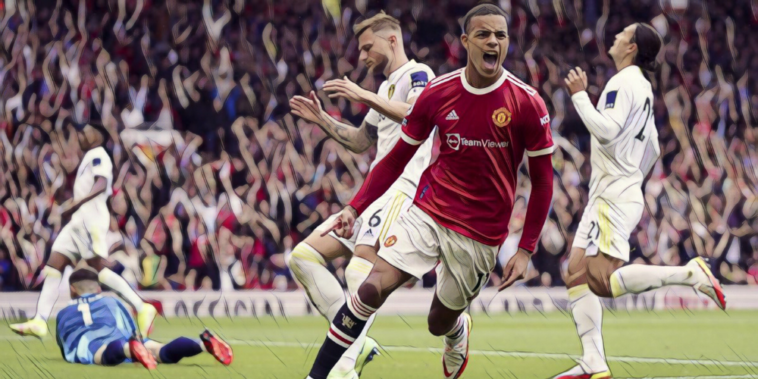 The teenage sensation has largely spent his early Red Devils career lining up on the right flank since truly breaking into the team during the 2019/20 campaign, having initially made his debut as a late substitute on that night in Paris the year prior.

Still just 19, the England international has already plundered 30 goals in 106 Manchester United appearances, including 18 goals in just 66 top-flight outings to put him fifth on the Premier League’s top-scoring teenagers list.

While he began last season in slightly underwhelming fashion, he caught fire towards the end of the campaign and looks to have continued that form to the current season, having looked mightily impressive in the 5-1 thrashing of rivals Leeds.

Deployed through the middle, Greenwood was a thorn in the side of the opposition defence throughout, notably teeing up Paul Pogba for what should have been the game’s opener, before latching onto the Frenchman’s superb pass later on and surging clear to fire in what’s becoming a trademark finish from the angle.

Such a display has once again led to suggestions that his short-term and long-term future could lie as a centre-forward, with Greenwood previously having said he wants to play as a number 9, although treble-winner Andy Cole has questioned whether that is the case, believing his future lies in more wide areas.

“I don’t actually think that Mase [Greenwood] wants to play as a centre forward,” he told Kelly and Wrighty show.

“That is a difficult, difficult role – to be a Number 9… that’s pressure. If you play off the left or right that’s different, but being a Number 9 at Old Trafford [is tough].”

The 49-year-old – who netted 121 goals in all competitions during his time at United – went on to add that he believes the club are still searching for a recognised centre-forward.

“I think with Mase’s talent he’s fortunate that he can play across the front line,” he added.

“But listening to some of the coaches, Fletch [Darren Fletcher], people like that who I speak to, I don’t think he’s fixed on becoming a No9.

“Like I said, Number 9 is tough, to be Manchester United’s Number 9 at that age is hard work.

“If you listen to the noises Ole’s making, come next season they may look to buy a [Erling] Haaland or a [Harry] Kane, if he’s still available.

“They’re looking long-term, Mase won’t be a Number 9 but he’ll play. They want a Number 9.”