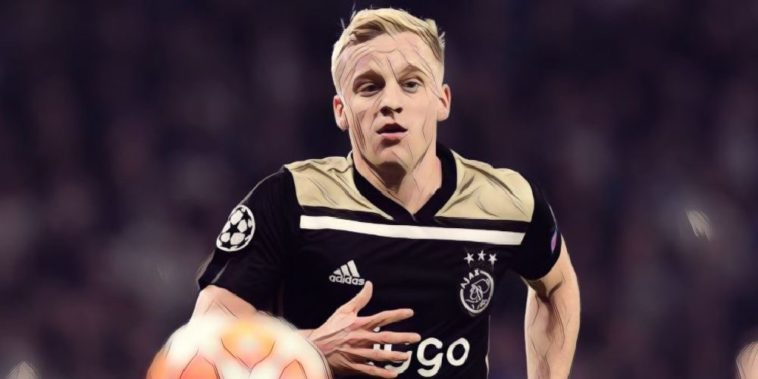 The versatile midfielder rose to prominence as one of the key men in the exciting young Ajax side that reached the semi-final of the Champions League last season and won a domestic double.

Van de Beek’s impressive showings both domestically and in European football have made the 23-year-old one of the most sought after midfielders on the continent, with Spanish giants Barcelona and Real Madrid reportedly eyeing up a move for the 10 cap Dutch international.

However, news broke last night that Manchester United were now in pole position to sign the highly-rated youngster and Sky Sports are now reporting that the Old Trafford are on the verge of agreeing to a deal.

After new contacts also on last hours with his agent, Manchester United have reached a total agreement on personal terms with Donny Van de Beek. The Dutch midfielder has accepted to join Man Utd until June 2025. ? #MUFC #ManUnited #transfers

United are believed to have used their good relationship with Ajax CEO and former Red Devils goalkeeper Edwin van der Sar to push through the deal, with Real Madrid and Spurs both thought to have been considering late moves for the player.

Van de Beek is also said to have been impressed with the ‘vision’ that United boss Ole Gunnar Solskjaer has to once again turn the 20 time champions of England into challengers for the Premier League title.

In terms of the players age, his ability to play as a 6, 8, or 10 in midfield and the reasonably low transfer fee for an international player with proven Champions League pedigree, it’s hard to argue against this being – on paper at least – an excellent deal for United.