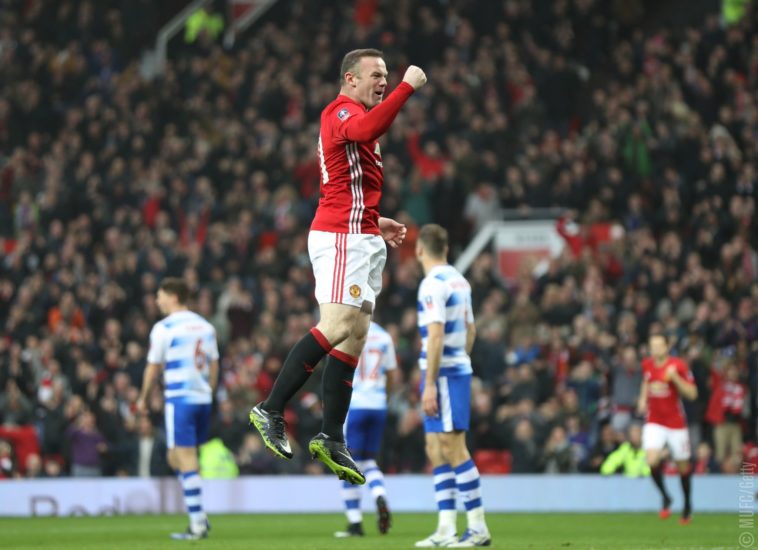 It was a special moment for Wayne Rooney as opened the scoring and equalled Sir Bobby Charlton’s club goalscoring record as Manchester United brushed aside Reading comfortably to win 4-0, as they move in the FA cup fourth round.

United captain Rooney equalled the record inside seven minutes as he moves one step closer to breaking the record with 250 goals. Anthony Martial continued his good form by expertly passing the ball into the far corner after only 15 minutes had gone. Marcus Rashford then got a second half brace as United strolled in the fourth round of the FA cup.

Reading have enjoyed a good season so far under former United centre-half Jaap Stam as they look to fight for a play-off place. They had every right to be confident, but United never let them settle as they dominated the early procedures. Rashford went close inside the first minute as his long range, side footed shotted narrowly missed the corner of the goal. Rooney then went close to equalling the record moments later as he brilliantly controlled Marcos Rojo’s driven pass, but Ali Al-Habsi got down well to deny his left-footed shot.

However, the time arrived as good work from Martial and Juan Mata gave Rooney the opportunity, and with a bit of luck off his knee, directed the ball into the back of the net. Sir Bobby Charlton and Sir Alex Ferguson seemed delighted as Rooney cements himself as a United legend with his name in the record books.

United seemed in the mood as the second came shortly after, as a nice one-two between Martial and Rooney allowed the French international to efficiently stroke the ball into the far corner of Al Habsi’s net, giving the keeper no chance.

Reading, who seemed well out of their depth, did create one chance in the first half. Liam Moore came inches away from getting a touch on Joey van den Berg’s volley across goal – the slightest of touches and Reading were back in the game.

United continued to push on and look for the killer goal, and came closer to finding it as Rashford skipped past Al-Habsi but failed to convert from a slightly tight angle, but really should have put the game to bed.

It was a great half from United, but one negative aspect was evident as Marcos Rojo came off injured with a knock, which Jose confirms is a muscle injury.

Reading played good football and kept the ball well for stages in the game, but never really threatened Sergio Romero. With the game at 1-0, all they needed was one goal to change the game, but it was United who pushed on in search of the third goal.

It came with 15 minutes left, as a brilliant pass from the consistently impressive Michael Carrick found Rashford, who expertly finished pass Al-Habsi to secure the win for United. Rashford then got his second when Al-Habsi made an awful mistake under pressure from the young United striker, who capitalised and scored his joint-easiest goal of the campaign after a similar one against Northampton.

That is eight wins in a row now for United, who look forward to their semi-final clash with Hull on Tuesday. For Reading, they can now put all their focus on a promotion push to the Premier League.