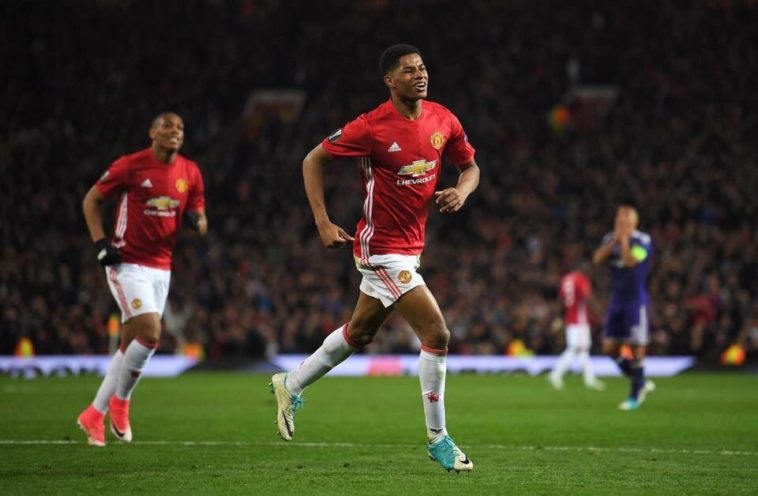 Marcus Rashford scored a dramatic winner in extra time against Anderlecht to send Manchester United into the semi-finals of the Europa League.

The victory didn’t come without a cost, as Manchester United suffered injuries to Marcos Rojo and Zlatan Ibrahimovic, the latter with an injury that looked potentially season ending.

Manchester United began the game in an urgent fashion, similar to the way they played against Chelsea. The positive start was soon rewarded, a swift counter attack started with a delightful pass from Paul Pogba. He found the run of Marcus Rashford who raced towards the Anderlecht box and found Henrik Mkhitaryan, who placed the ball into the back of the net to give United a 1-0 lead and a 2-1 lead on aggregate.

Ruben was again in inspired form as he denied a curling effort from Jesse Lingard who attempted the get the second goal from the edge of the box.

It took until the 20th minute for Anderlecht to gain some control in the game and began to cause Manchester United some problems. Frank Acheampong beat Marcos Rojo and Eric Bailly to the ball and surged at the United goal, but he dragged his effort wide of Sergio Romero and the United goal.

The game became rather frantic after the half time break with both teams looking dangerous on the counter attack. Luke Shaw raced into the Anderlecht box and centred the ball across the box but Lingard turned the ball wide of the post from a few yards out.

Marcus Rashford’s pace continued to be a constant threat. A mistake from Dennis Appiah put Rashford through one on one on goal but the 19 year old put the ball wide after going round Ruben in the Anderlecht goal.

Ruben then denied Zlatan Ibrahimovic from close range minutes before Pogba missed from six yards out from a corner.

The two sides could not be separated and extra time was needed.

United continued to spurn more chances, Marcus Rashford produced a superb rabona cross which found Paul Pogba who attempted an overhead kick. The effort would have gone in had it not been for a superb block from the sensational Spajic. It looked like another one of those games for Manchester United and Jose Mourinho.

Manchester United finally found the breakthrough after 107 minutes. Maroune Fellaini headed the ball down to Marcus Rashford who turned two defenders brilliantly before firing the ball into the net to give United the lead in the game and on aggregate to send Mourinho’s men into the Europa League semi-finals.