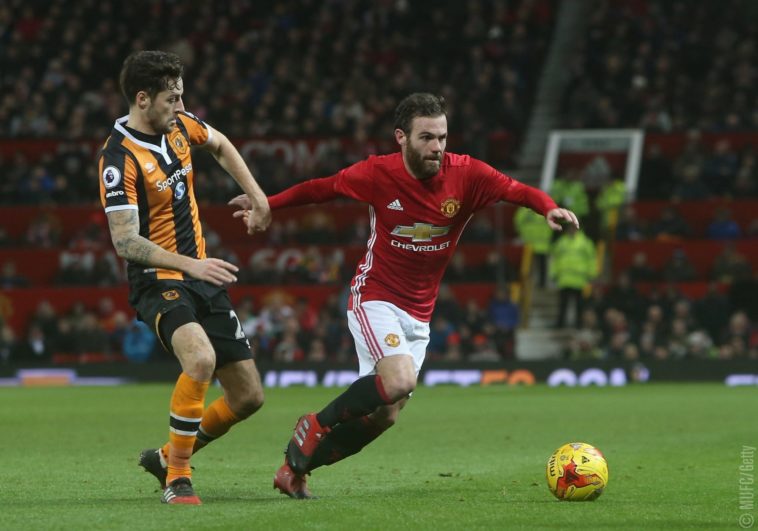 Juan Mata and Marouane Fellaini both scored second-half goals to give Manchester United a 2-0 lead going into the second-leg of the EFL Cup semi-final.

United were frustrated in the first half as Hull City defended brilliantly and limited United to only a few chances, with the hosts seemingly growing impatient. However, United kept at it and Mata, who once again impressed, poked home from close range before Fellaini headed home late on to give Jose Mourinho’s men some breathing space for the away leg.

Despite the assumptions that the EFL Cup is not an important trophy, you wouldn’t have been able to tell through United’s starting XI. Out went Zlatan Ibrahimovic through illness, but in came Paul Pogba and six other changes as United fielded a mightily strong team. On the other hand, Hull City have been hit by various injuries, as they were forced to field a makeshift defence with two midfielders in it.

United came close to taking the lead within two minutes, as Matteo Darmian’s low cross found Mata, whose shot was saved well by Eldin Jakupovic. United never really settled well as Hull continued to be resilient and at the same time, threatened occasionally.

Harry Maguire, who had an excellent game for the Tigers, came close for the visiting side as he went past United’s players with ease, before his tame shot was saved by David de Gea. Hull’s injury situation worsened as Markus Henriksen got injured in a shoulder to shoulder challenge with Pogba, and was replaced by Abel Hernandez after 19 minutes.

United were still in control, dominating possession and creating some chances. Henrikh Mkhitaryan twice came close for the hosts as he should have done better to hit the target, especially when Mata set him up on the first attempt. Pogba and Valencia both had chances to give United the lead, but it was a frustrating first half for the team in red. Adama Diomande came close to giving Hull the lead, but for the offside flag to go up after his header hit the post.

United came out for the second half like a different side, as Wayne Rooney came narrowly close to becoming United’s record goalscorer with 250 goals, but his shot rifled past the post. Pogba had his passing boots on, as showed his excellent range by constantly switching play, which led to United taking the lead. Good work down the right by Antonio Valencia found Mkhitaryan, who leaped high to head the ball back across goal for Mata to poke home. Replays show it was offside, which is harsh on Hull as who knows what could have happened if they continued to frustrate United.

Rooney will have to wait another game to break the record as he was taken off with 30 minutes to play, as Mourinho opted to get more goals through Anthony Martial coming on to attack a tiring Hull team.

Hull threatened on the counter as Diomande met David Meyler’s cross with a bicycle kick, but his attempt was always rising and went high over the bar.

Pogba then came close to adding a second goal, as a long range free-kick beat the wall and the ‘keeper, only to see it cannon off the post, similar to his effort against Spurs.

United continued to press and finally got their reward late on. Second half substitute Marouane Fellaini met Darmian’s cross, and his header back across goal and into the back of the net. The midfielder showed his happiness by running 40 yards to hug his boss, and that goal could be crucial as it gives United the breathing space they need going back to Hull on the 26th January.