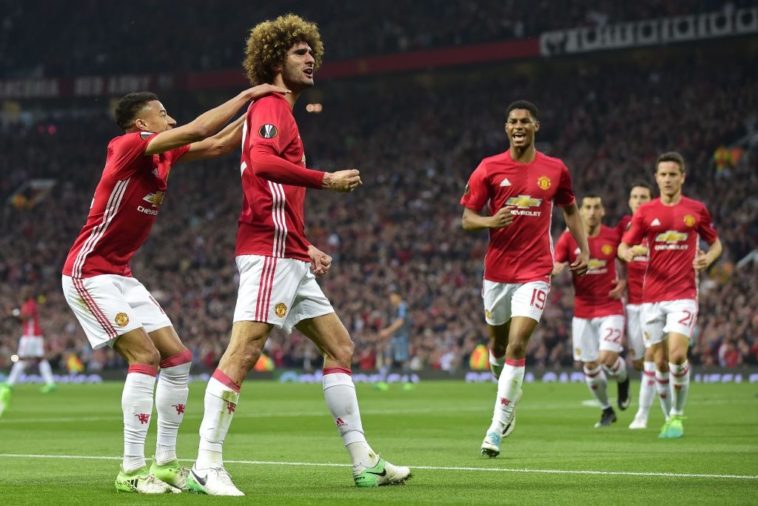 A first at Old Trafford this season, a 1-1 draw that is of some use to Manchester United who booked their place in the Europa League final.

A nervy game in which United were not convincing at all once again in a game this season, but in the end all that matters is the result and United will face Ajax in Stockholm in two weeks time for the final.

Celta started the game very well, dominating the possession and looking as if they could cause problems for United.

The first chance did come for Celta. Cabral found the run of Iago Aspas on the right who coasted past Darmian and Blind and unleashed a curling shot from an angle which was saved by Sergio Romero.

Mourinho’s men rode the early Celta storm and were rewarded for their resilience.

Marcus Rashford on the left hand side spotted the run of Marouane Fellaini with a sensational ball into the box that found Fellaini who headed into the net from close range to give United the lead. Some questionable goalkeeping from Celta keeper Sergio Alvarez who got a hand to Fellaini’s effort but did not make the save when arguably he could have.

Celta continued to dominate the possession at Old Trafford after the United goal. A neat spell of possession and passing found Hernandez on the edge of the United box, the Chilean took the shot on but it was an easy save for Romero.

Yet again it was Celta who were imposing themselves in the game in the first half. Superb play from Sisto on United’s right hand side, the winger went on the outside and smashed a cross across the box that Daniel Wass could only head wide. Nervous moments for those in Old Trafford as Celta were far from finished in the tie.

The first real action of the second half came from a corner to Manchester United. Celta could only partly clear their lines from the corner, the ball came to Mkhitaryan on the edge of the box who unleashed a fierce shot that was incredibly saved by Sergio Alvarez.

The game was becoming a nervous affair for Manchester United with the reds unable to get a grip on the game. A cross from Hugo Mallo on the right found Sisto in the United box, who then picked out Guidetti but the Swede lashed his effort well wide of the goal.

At the other end of the pitch Marouane Fellaini tested Alvarez from a tight wide angle but the Celta keeper was able to save the close range shot.

From the 70th minute Mourinho’s men were on the edge, under extreme pressure from Celta. Once again Hugo Mallo was man looking to make things happen. The captain cut inside onto his left foot, chipping a ball into the box that found John Guidetti but the Swede was once again off target with his effort. If not for poor finishing Celta would have punished United.

Manchester United were soon punished. A cross into the box from the second phase of a corner found Fernando Roncaglia in the box whose looping header went past Sergio Romero to level the game for Celta, who still needed one more goal to win the tie.

An altercation saw United’s Eric Bailly appear to push John Guidetti, who made the most of the contact and fell to the floor. The Celta players took exception to Bailly’s apparent push, especially Roncaglia who put a hand to Bailly’s face. Both players were given a red card after a totally unnecessary incident but one that was exasperated by the theatrics of John Guidetti.

Manchester United successfully navigated the remaining few minutes of the game. Thanks to their aggregate lead Mourinho’s team were able to book their place in the Europa League final after another unconvincing performance.

The final whistle prompted scenes of collective relief from the United team who now have to navigate three pretty meaningless league games avoiding injuries before that final against Ajax in two weeks that means so much.