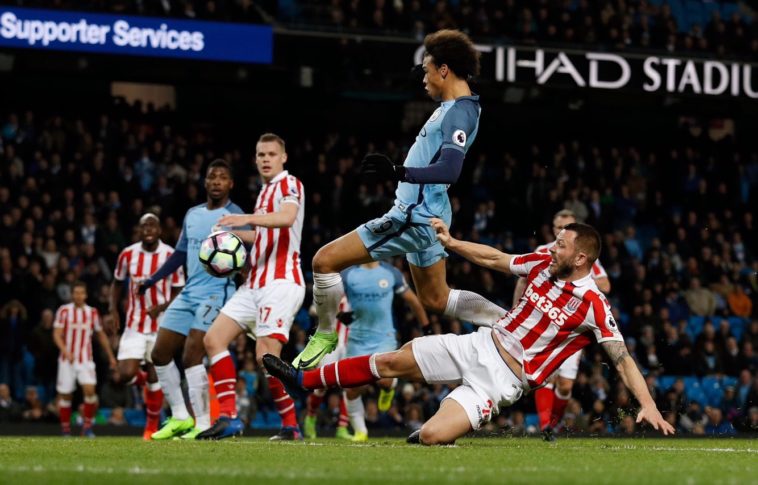 Stoke City earned a hard-fought draw at the Etihad on Wednesday night, here’s what we’ve learned from it.

Stoke’s defence certainly hasn’t had its best this season. The Potters have conceded 40 goals so far this season. It is the highest number of any in the top half of the table. But on Wednesday night they reverted to the classic 4-4-2 and it certainly paid off. Much like Leicester for most of last season, Stoke sat very deep and closed spaces very well. This meant they offered little going forward, but a clean sheet at the Etihad is nothing to be sniffed at.

2. David Silva should have started.

Presumably rested ahead of City’s busy fixture schedule, the Spaniard was sorely missed. City moved the ball well along their back 4 and holding midfield, but struggled in the Stoke half. Obviously Stoke were very deep which congested creative players such as De Bruyne and Sane. When he eventually came on, Silva had a huge impact. He created chances and even almost scored one for himself on the 80-minute mark when he skewed a shot just wide of Lee Grant’s post. A top player

Although Shawcross claimed the man of the match award, without his defensive partner he may have struggled. Since his arrival Martins Indi has put in some incredible defensive performances. As well as his defending, he has also been very effective bringing the ball out from the back. All this combined with the fact he’s a fan favourite, Sign him up Sparky!

4. How is Jesus Navas still at Manchester city?

Even though Sterling regularly starts ahead of him Navas was given a chance. He certainly didn’t take on Wednesday night. For most of the game he stayed wide on the right and rarely received the ball. Even on occasions he did receive the ball in dangerous areas his delivery was very poor. Considering the money city spent on wingers in the summer, including the rarely started Nolito, should Navas still be at a club challenging for the title?

5. Pep needs to focus on the league.

At his previous clubs Pep has been known to win several titles per season. But he needs to accept that English clubs are incredibly competitive both in the league and cups competitions. Despite Cits still having Aguero, Toure and De bruyne out on Wednesday, at times they looked short of quality.

This quality could have been provided by the rested Silva and Sterling. But ahead of City’s FA Cup game at the weekend and Champions League in the week, Guardiola elected to rest the pair. If Pep wants to win the league either this year or next, he must make sure City put out a full team in every Premier League fixture.