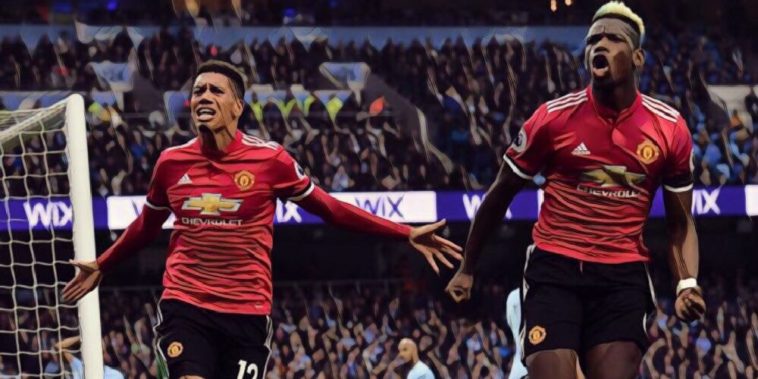 Manchester United spoiled Manchester City’s title party by producing a stunning second half fightback to overturn a two-goal deficit.City looked like they were strolling to the title at half time after Vincent Kompany and Ilkay Gundogan had put them two up, and United were yet to have a shot, let alone test Ederson in the City net.

That all changed in the span of 17 second half minutes. Paul Pogba, subject of much criticism before the game and during the first half, scored twice in three minutes to draw United level. Fourteen minutes later, Chris Smalling guided home what would turn out to be the winner from Alexis Sanchez’s cross.

The Citizens were left stunned, and could have had an equaliser, were it not for a combination of poor finishing from Raheem Sterling, and a stunning save from David de Gea.

In the end, United held out for the victory, making a statement and denying City the satisfaction of beating their archrivals for the title. Here are five things we learned from the game:

Paul Pogba was having a torrid time when the whistle went to signal the end of the first half. 2-0 down, berated by the media beforehand, and one of the worst players on the pitch in the opening 45 minutes, United needed Pogba to step up and be counted.

He did that, and then some.

Pogba was immense in the second half, fired up, more involved and more passionate than he had ever been in a United shirt. He produced two excellent finishes to draw United level, and generally ran the midfield. He showed why the Red Devils broke the bank for him nearly two years ago, in what could be a watershed performance for the Frenchman.

The Citizens had only conceded three goals twice this season. Both times it was to Liverpool and their electrifying forward line, which had pressured City into mistakes.

Nicolas Otamendi and Vincent Kompany were at all at sea in the second half, with the midfield failing to track the late runs of Pogba. The nadir was Chris Smalling’s goal, being given acres of space to sidefoot home Alexis Sanchez’s cross as no one in City’s defence took responsibility to challenge him, especially Otamendi. After the capitulation at Anfield on Wednesday, this is the last thing they needed.

Liverpool will be licking their lips

Speaking of Anfield, one team with a definite interest in this tie were Liverpool. With their stunning win on Wednesday tucked away in their back pocket, the red half of Merseyside must have been waiting with baited breath to see how City responded to their most humbling defeat of the season.

What they saw will have filled them with confidence.

City’s second half collapse showed that they were still reeling from Wednesday, that their defence is still uncertain. What is even worse is that they had a 2-0 lead. This is the kind of turnaround that will stick in the memory, even though it will not affect the eventual destination of the league title. Mohamed Salah, Sadio Mane and Roberto Firmino will fancy their chances of nicking an away goal or two in the return leg.

Otamendi’s time at centre-back may be up

Vincent Kompany has endured his fair share of injuries over the years, but the weakest link in the City back line today was Nicolas Otamendi. The Argentinian was shocking in the second half.

For the first goal, Sanchez drew him out of position, creating space for Ander Herrera to cushion the ball to Pogba. The Frenchman then ghosted right past him for the equaliser. He then failed to track Smalling’s run for the eventual winner.

By the end of the game, City were a nervous mess every time the ball was in the air near their box. City have been largely excellent this season, but to improve, it might be time for Aymeric Laporte to replace the Argentinean as the starting centre-back for the club.

Jose Mourinho is not done yet

Many have been quick to write the Portuguese manager off as a spent force. He has not won a league title since 2014/15 with Chelsea, and his United side have flattered to deceive on several occasions, in spite of major investment. This game could have very easily followed the route that their game at Wembley against Spurs took earlier this season, a 2-0 deficit that turned into a procession.

However, Mourinho showed that he could still inspire his team, and despite riding their luck (Ashley Young was lucky to not give away a penalty, and Raheem Sterling endured a nightmare game with regards to his finishing), United proved that they can challenge the best teams in the world.

Mourinho will be back next season, and this win will give them confidence that they can take the title off City.