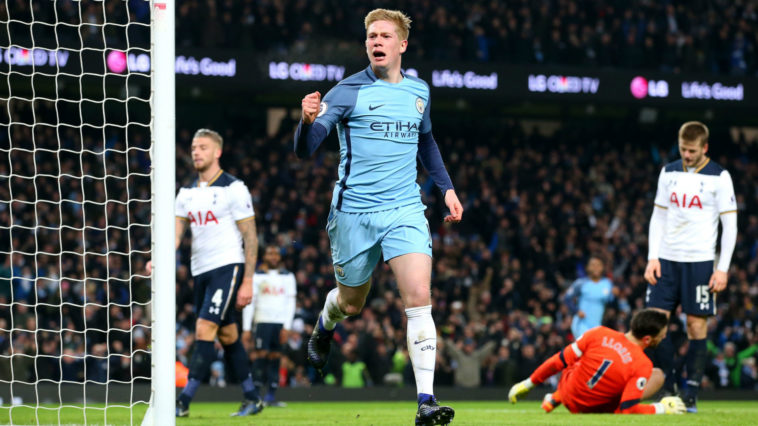 Manchester City and Tottenham Hotspur had to settle for a point each in an entertaining game at the Etihad stadium.

Perhaps surprisingly given Spurs’ impressive form going into the match, it was City who started the better of the two sides. Spurs were struggling to deal with City’s high press and carved out the first real chance of the game. Pablo Zabaleta found himself through on goal, and if not for an incredible Toby Alderweireld challenge, City surely would have been ahead. It’s fair to say Spurs faced what can only be called an onslaught during the opening 25 minutes, forcing Pochettino to change his formation. The Argentine moved to a more conventional 4-2-3-1, with Eric Dier moving into a defensive midfield role.

It took Spurs 30 minutes to register their first shot of the match, with Rose teeing up Wanyama only for the Kenyan to fire well over the bar. Despite this, City continued to dominate. Aguero managed to turn Alderweireld, who did well to send the striker wide. Spurs ‘keeper Lloris was forced into a good save at his near post. As the half came to a close, Spurs were incredibly fortunate to go in level, with City playing some brilliant football at times.

Pochettino made a change at half time with Heung min Son coming on for Kevin Wimmer who had a shocking first half up against the City front line. Despite this, City’s dominace soon took its toll. De Bruyne played the ball over the top of the Spurs defence to Leory Sane who managed to get to the ball ahead of the on-rushing Hugo Lloris to tap into an empty net. A combination of poor defending and goalkeeping gifted City their lead. Less than five minutes later and City had doubled their lead. Sterling crossed the ball from the right, and Lloris spilled it straight into the path of Kevin De Bruyne to tap home. Another Lloris mistake from a man who is usually so reliable for Spurs. City were full value for their two goal lead.

However, Spurs managed to instantly respond through in form man Dele Alli. Kyle Walker whipped in a wicked ball from the right to Alli to head home his 11th Premier League goal of the season. The delivery from Walker was perfect, and he registered his sixth league assist of the season. Not what Spurs deserved, not that Pochettino will care.

Manchester City almost restored their two goal lead, and would have done so if not for a brilliant tackle from Rose. Sterling found himself away rom the Spurs defence, about to shoot, but Rose wrapped his leg around Sterling, getting the ball in impressive fashion.

It took about 70 minutes for Spurs to get going in the game, with Eriksen and Alli’s influence growing, much to the despair of the City back line. However, the major talking point of the game came on the 75th minute as Sterling found hismelf one on one with Lloris, however a push from Walker seemed to put him off balance, despite getting his shot away. Although most will say should have been a penalty, Sterling was offside in the build up, so maybe there was some justice in the call?

Just two minutes later, Spurs found themselves level. Kane flicked the ball into Son’s path and the substitute fired into the bottom corner first time past a helpless Bravo.

£27million man Gabriel Jesus thought he had given City the win that they deserved as he fired into the net late on, but it was rightly ruled out for, much to the frustration of the Etihad crowd.

As the match ended, it is fair to say Spurs were fortunate to come away with a point, who really did not get going until late on. From a City perspective, it will be worrying how they failed to close the game out, with their leaky defence exposed once again.