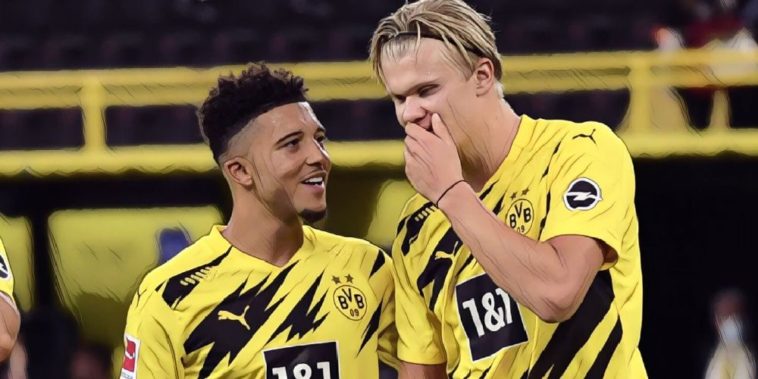 Manchester United ‘aren’t anticipating’ making a move for Harry Kane this summer, the club set to wait to sign Erling Haaland in a years time as they prioritise a move for Jadon Sancho this time around.

Following the disappointment of their Europa League final defeat to Unai Emery’s Villarreal side, all eyes are now on what could be a pivotal upcoming transfer window, both in terms of potential incomings and outgoings.

There are doubts over a number of Manchester United first-team players – including both Paul Pogba and David De Gea – with the club keen to generate funds to pursue their top targets, one of which appears to be Borussia Dortmund man, Jadon Sancho.

United pulled out of negotiations for the former Manchester City starlet last summer after refusing to meet his £108m asking price, yet look set to return to snap up the winger on a reduced fee, Dortmund having a ‘gentlemans agreement’ with the England international that he can leave the Westfalenstadion.

United are one of the clubs who have strongly been linked with making a move for Harry Kane this summer following his request to leave Spurs, though according to the Mail, Ole Gunnar Solskjaer and director of football John Murtough have put together a plan for the upcoming season, with Kane not anticipated to be a target.

Having tied Edinson Cavani down to a new deal and with Mason Greenwood potentially set to play through the middle in future, the Manchester club are said to be relaxed about chasing a centre-forward, with a new right-wing addition – such as Sancho – the priority.

After a difficult start to the campaign, the 21-year-old ended the term in sparkling form, netting crucial goals en route to Dortmund’s DFB-Pokal triumph, as well as their eventual third-placed finish.

With 30 plus goal involvements to his name in all competitions in each of the past three seasons, the skilful forward would seemingly be the perfect man to fill the longstanding void on the right-flank, with Solskjaer having deployed the likes of Greenwood, Marcus Rashford and Daniel James on that side in recent times, yet all appear better suited elsewhere.

Despite Dortmund dropping their asking price, it has been reported in Germany that they still want around €90m (£82m), making a big-money move for the likes of Harry Kane seem unlikely, with a number of other positions – such as central defence – also needing addressing.

While Solskjaer may be content with his strike options for now, the suggestion is that the club will wait another 12 months to try and sign Norwegian hotshot Haaland, the youngster having worked under the United boss at Molde.

Despite persistent speculation over his future, the 20-year-old has hinted recently that he could remain in Germany for another season, the player reportedly having a £65m release clause in his current deal that comes into effect in the summer of 2022.

Although there will no doubt be a scrap among Europe’s elite to sign the lethal forward next year, United are hoping that Solskjaer’s connection will be enough to tempt him into making the switch.