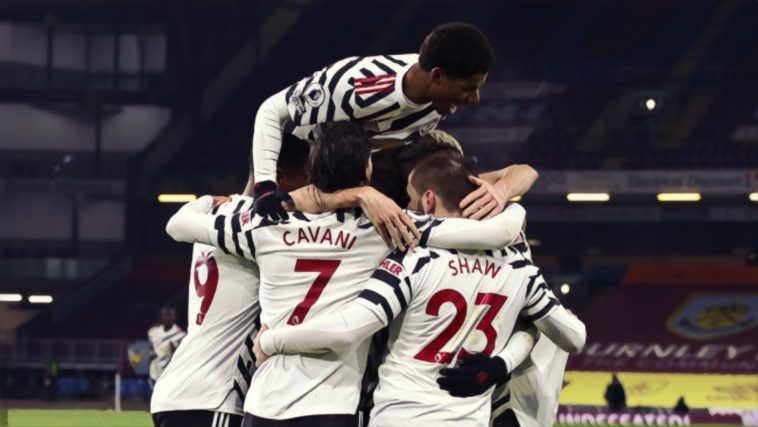 Manchester United host Burnley on Sunday afternoon, the Red Devils with the chance to reduce the gap between themselves and leaders Manchester City to just eight points.

Here’s everything you need to know about that meeting at Old Trafford:

Ole Gunnar Solskjaer’s side produced what’s becoming a typical away performance at the weekend, as they recovered from a limp first-half to secure a deserved victory against an out of sorts Tottenham Hotspur.

After a pretty drab opening half-hour, the game suddenly sprung to life, Edinson Cavani seeing his fine finish disallowed for a controversial foul by Scott McTominay on Heung-min Son in the build-up, the incident sparking a war of words between Solskjaer and former United boss Jose Mourinho after the game.

Almost inevitably, after having been involved in the incident, Son then gave Spurs the lead just before half-time, before United’s brutal second-half display secured all three points, with goals from Fred, Cavani and young Mason Greenwood capping a fine afternoon’s work.

That result means the Red Devils have now collected a league-high 28 points from losing positions, while they continued their fine away form, with them now on a 23-game unbeaten league run on the road.

While they’ve been impressive away from home, United have rarely looked comfortable at Old Trafford at home this season, although Solskjaer will be hoping that the decision to alter the red banners at the ground will begin to bear fruit, following his bizarre claim that it had had an impact on the team’s performances.

The Red Devils did clinch a home victory on Thursday night in the Europa League, as they secured a relatively comfortable passage to the semi-final’s following a 2-0 victory against Granada on the night.

As for this weekend, the likes of Harry Maguire, Scott McTominay and Luke Shaw will all be available having missed the clash with the La Liga side due to suspension.

Although it would take something fairly dramatic for Sean Dyche’s side to find themselves in a scrap for survival, their most recent defeat to fellow strugglers Newcastle United has made a sixth successive season in the Premier League no longer an absolute certainty.

The Clarets had taken the lead at Turf Moor through former Watford man Matej Vydra, before the introduction of the mercurial Allan Saint-Maximin completely altered the game, the Frenchman providing an assist and a stunning solo effort to clinch all three points for the Magpies.

That result means there is just a point separating Burnley and Steve Bruce’s side, although the former are still seven points clear of Fulham in 18th, the Cottagers also having played a game more than the sides around them.

In truth, it’s a real feat that Dyche’s men are where they are in the table, following a summer in which their only real major signing was Brighton’s Dale Stephens, the midfielder costing just under £1m.

As Dyche pointed out this week, it is a real challenge to continue to keep producing results without spending, the 49-year-old noting the difference in transfer activity between themselves and last Sunday’s opponents Newcastle.

Burnley will be looking to boost their survival hopes with what would be a shock result against the Red Devils, although they did claim their first-ever Premier League win at Old Trafford last season. As for team news, England stopper Nick Pope could be able to return after sitting out last weekend’s defeat, while Ashley Barnes is close to a return after a two months absence.

It wasn’t exactly a classic when the two sides last met, as United left it late to see off a typically stubborn Burnley side on a dreary, Tuesday night at Turf Moor.

As they have done for much of this season on the road, the Red Devils didn’t start particularly well, while they were also perhaps fortunate not to see Luke Shaw dismissed, the left-back with a robust challenge on Johann Berg Gudmundsson in the build-up to their own attack in which Edinson Cavani was hauled down by Robbie Brady.

The left-back’s challenge ultimately spared Brady any punishment after a lengthy VAR review, before the technology was once again under scrutiny after Harry Maguire saw his headed effort ruled out by VAR for a foul on Erik Pieters at the back post.

In a tightly contested affair, it was a rare moment of quality that made the difference, Paul Pogba continuing his fine form to brilliantly volley home, the result taking United to the top of the table.

Is Paul Pogba back to his best? 🔥

Jamie Redknapp said that Pogba ran the show for Manchester United and overshadowed Bruno Fernandes in their 1-0 victory over Burnley last night. pic.twitter.com/jTpuqIUPxx

Picking each ‘big six’ club’s Player of the Season