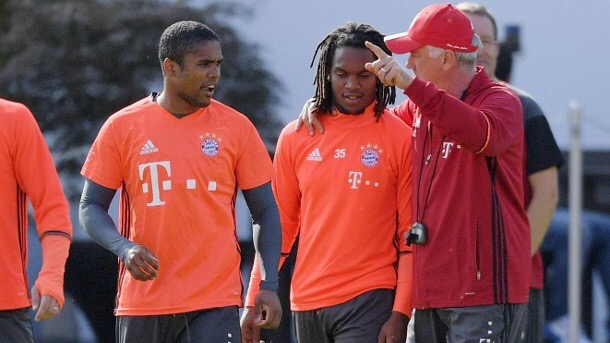 Manchester United and Liverpool have been placed on red alert as Bayern Munich have told two of their stars that they can leave this summer.

The German Champions have told Douglas Costa and Renato Sanches that they are prepared to listen to offers for the duo who have endured challenging seasons at the Allianz Arena.

Liverpool have been linked with making a move, and that could now be boosted with their Champions League qualification, whilst Manchester United are also thought to be interested  in signing the 26-year-old.

Meanwhile, Portuguese youngster Renato Sanches only moved to the Bundesliga club last summer, making a €35million move from Benfica. Despite showing a lot of promise during Portugals successful Euro 2016 campaign, the 19-year-old only made 25 appearances in his debut campaign in Germany, failing to score a single goal.

Manchester United were interested in signing Sanches at the time, but they took too long in deciding the future of Louis van Gaal, leaving Bayern Munich to come in and steal him from under their noses. Jose Mourinho is known to be a big admirer of his fellow countryman, and he could try to take him to Manchester United this summer to bolster his midfield.

Manchester United’s hopes of signing either player could come down to whether the beat Ajax on Wednesday night in the Europa League final. Victory in Stockholm will see them progress into the group stages on next seasons Champions League.