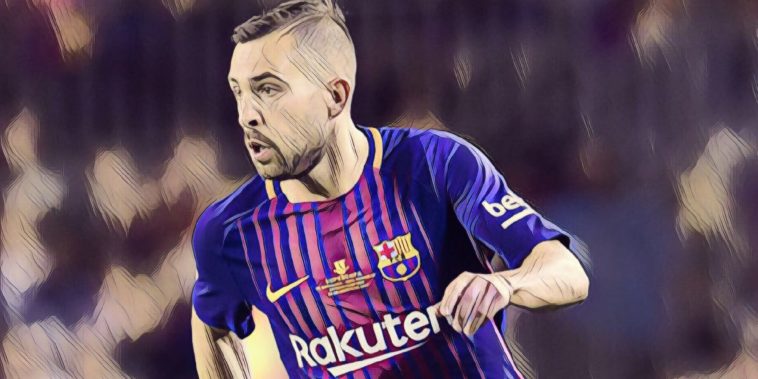 Manchester United and Chelsea are both eyeing a potential move for Barcelona full-back, Jordi Alba, according to reports in Spain.

The Spanish left-back has had a fine season with the Catalan club, providing 11 assists on their way to lifting the Spanish League title at an absolute canter.

While Alba has had an excellent season, he still hasn’t been offered a new deal by Barcelona, with his current deal set to expire in two years time, despite club officials telling the defender over a year ago that he would be offered a new contract:

“Raul Sanllehi was still at the club when they told us not to worry, that they were going to call us to renew,” said Alba’s agent Vicente Fores.

“But we are still waiting. It’s been a year-and-a-half now. We don’t understand anything, maybe it’s normal for Barca or maybe they’re not happy with the performances of a player included in FIFA’s XI and who is the defender with the most assists in European football.”

Now, according to Spanish publication SPORT, Chelsea and Manchester United are eyeing up a potential move for the Barcelona ace.

Manchester United are known to be keen on signing a new left-back, with Luke Shaw seemingly not in favour with Jose Mourinho, meaning that converted winger Ashley Young has been the club’s first choice left back over the last season.

Chelsea are also keen to upgrade fellow Spanish left-back Marcos Alonso and Alba is thought to be an option.

Whether Alba makes the move to the Premier League is yet to be seen, or whether this is just a tactic by the players agent to get his client the new deal that he has been promised.