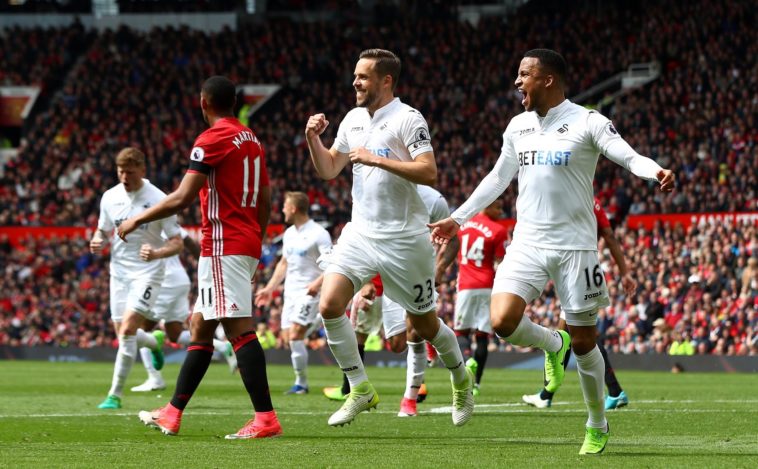 There are many certainties in life at the moment, taxes, Theresa May saying the words ‘strong and stable’ and Manchester United drawing a game at Old Trafford. Yep, Manchester United delivered yet another 1-1 home draw against a team from the lower reaches of the table.

It was an incredibly poor performance from Jose Mourinho’s team who were laboured and flat. They were outplayed by Swansea for large periods of the game whose midfield diamond left United bamboozled at times.

The game got off to a frustrating start for Mourinho with Luke Shaw limping off with an injury not even ten minutes into the game. Swansea dominated the first half, creating the best chances and enjoying the dominance of possession.

Fernando Llorente tested David De Gea after a defensive mix up. Meanwhile Jordan Ayew’s shot was saved by De Gea and nearly fell at the feet of Sigurdsson but the Icelander couldn’t reach the ball.

United’s first chance came when Anthony Martial found the perfectly timed run of Jesse Lingard, but Lingard couldn’t get enough power on his first time shot allowing Fabianski to save.

Seconds before half time United were awarded a penalty. Marcus Rashford was deemed to have been fouled by Fabianksi while running into the box. Wayne Rooney stepped to convert the penalty and give the hosts a 1-0 lead going into the break.

Upon looking at the replays, Rashford seemed to be going down and looking for contact. A debatable decision.

Wayne Rooney should have had two goals, his shot at Fabianski’s goal hit own team mate Anthony Martial. Anthony Valencia then who drove a fierce strike at goal but it was well saved by Fabianski.

United’s captain then gave away a stupid free kick on the edge of his own box. Gilfi Sigurdsson stepped up to take it and made no mistake in curling the free kick past David De Gea. Bizarrely Ander Herrera went to the left of David De Gea in goal to cover the space left by the keeper but then quickly vacated the space, which is where Sigurdsson placed his free kick.

Fernando Llorente spurned a late chance for the visitors after Sigurdsson found him in the United box but he could not connect with the goal in front of him.

The game was a huge disappointment with United losing both Shaw and Bailly to injuries, leaving United with no fit senior central defenders. As well as the injuries it was yet another home game United have drawn dropping points when rivals around them have also done the same. A missed opportunity for United who now turn their attention to the Europa League semi-final against Celta Vigo on Thursday.