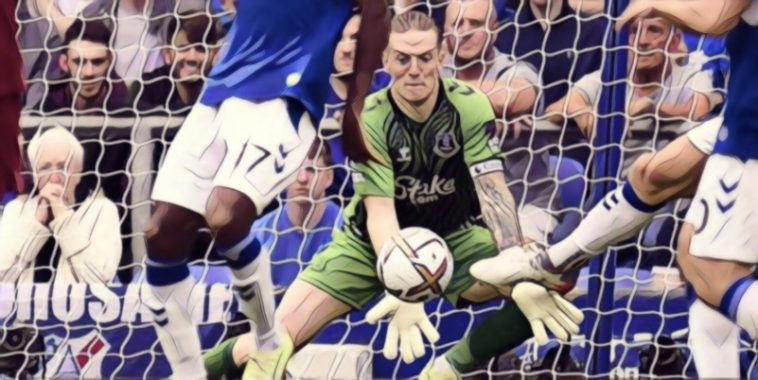 Everton remain winless in the Premier League this season but Frank Lampard and his side can take plenty of positives from their performance after they played out an entertaining 0-0 draw with Liverpool in the Merseyside derby today.

Today’s encounter began in the full-blooded nature we’ve come to expect from this famous fixture and both sides would trade chances early on. Firstly Everton’s new signing Neal Maupay would drag a shot just wide of the post before the returning Darwin Nunez failed to connect properly with a header at the back post.

On the half-hour mark, the Goodison Park faithful thought their side was about to take the lead only to see academy graduate Tom Davies’ delicate effort clip off the post.

Just before the break and Liverpool burst into life with Nunez forcing Jordan Pickford into a superb save from a wide angle before Luis Diaz gathered the rebounded and hammered a powerful strike against the post.

Liverpool upped the intensity after the break and on the hour mark, Everton ‘keeper Jordan Pickford had to pull off a couple of fine saves to deny Brazilian duo Roberto Firmino and Fabinho.

The Toffees still carried a threat of their own though and a lightning-quick counter-attack ended with Maupay squandering a glorious chance by firing straight at Alisson from inside the six-yard box.

Minutes later and Everton thought they had taken the lead through former Liverpool man Conor Coady, but VAR stepped in and adjudged the England international to be marginally offside when he tapped home at the back post.

With 10 minutes left on the clock, Alisson would once again show his class, the Brazilian goalkeeper arching his body to tip a deflected Dwight McNeil effort over the bar.

The battle of the goalkeepers continued soon after with Pickford having to get down low to keep out a half-volley from Firmino.

As the game entered the 94th minute it looked destined to end as a draw, but there would be one last big chance. It fell to Mohamed Salah and the Liverpool attacker’s effort looked to be heading in at the near post only for Pickford to tip it onto the post to seal a man-of-the-match performance.

“Another unfortunate goal disallowed for VAR but it has very tight – we’re building, we’ve got that character and the team spirit is pushing us on. We haven’t got a win yet but we’ve been tough to beat,” Pickford told BT Sport.

“I thought I had a good game today – I helped the lads and you need lots of leaders on the pitch and I think we’ve got that. We didn’t get three points but we got a draw and we can keep building.

“They were good – Allison made some wonderful saves as well but that’s our job, to help the team when we’re needed.

”It’s my first clean sheet of the season and that’s where we have to keep building and get better and better.

“Four draws but it’s hard work and commitment – if we keep building and get stronger then we’ll get the wins.”