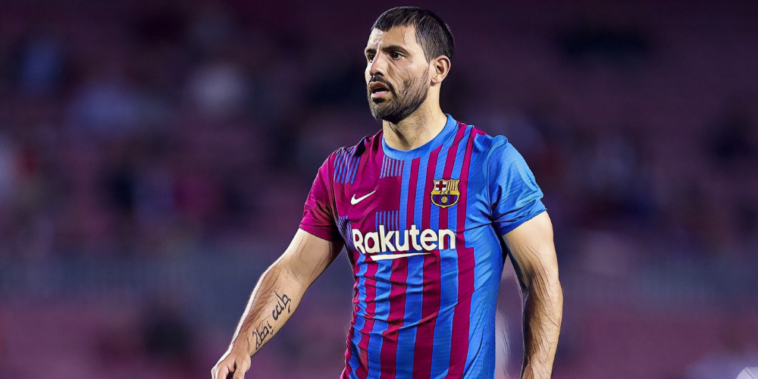 Sergio Aguero is set to announce his retirement from football this week, following the discovery of a heart problem.

Aguero will announce his retirement from the sport at a press conference on Wednesday, having not featured for Barcelona since suffering from a chest discomfort during the Spanish side’s 1-1 draw with Alaves in October.

The Argentina international was later diagnosed with a cardiac arrhythmia (irregular heartbeat), a diagnosis that will see Aguero call time on his career just six months after signing for Barcelona from Manchester City.

Aguero’s time in Catalonia saw him make just five appearances as injury issues disrupted the infancy of his career with the club, having arrived in Barcelona after a decade in the Premier League that saw him become the division’s highest-scoring overseas player of all time.

Guillem Balague, writing for the BBC, has confirmed Aguero will call time on his career this week, with tributes set to follow for Manchester City’s all-time record goalscorer, who scored 260 goals in 380 appearances during a glittering career at the Etihad.

After spells with Independiente and Atletico Madrid, he signed for City in a £34m deal in 2011 and became a leading figure in the club’s emergence as English football’s most dominant side.

Aguero is one of just two players – alongside Thierry Henry – to have scored 20+ goals in five consecutive Premier League seasons and netted arguably the Premier League’s most iconic goal with his stoppage-time winner to snatch the title on the final day of the 2011/12 season.

Just three players has ever scored more Premier League goals than Aguero, whilst he also holds the record for the most Premier League hat-tricks, his 12 trebles having eclipsed the previous landmark set by Alan Shearer.