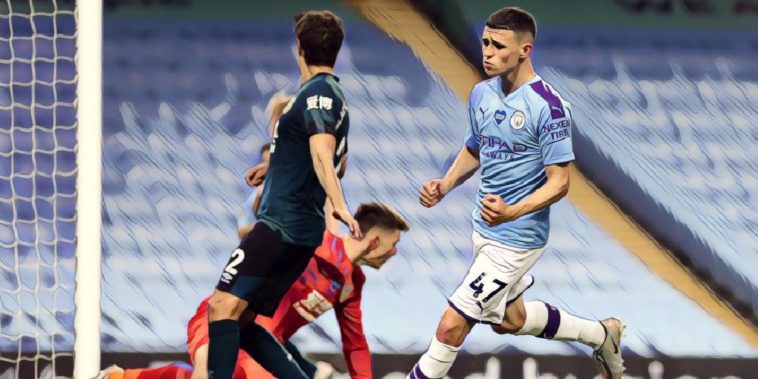 A heavily rotated Manchester City side made light work of Burnley this evening, Sean Dyche’s side being beaten 5-0 at the Etihad.

Pep Guardiola made eight changes to the side that comfortably despatched of Arsenal last week, but it made little difference, Man City taking the lead after 22 minutes with Phil Foden firing home from the edge of the box following a short corner routine.

Two minutes before the interval, and Riyad Mahrez doubled City’s lead, the Algerian smartly controlling an inch-perfect long-ball from makeshift centre-back Fernandinho, before twisting and turning the Burnley defence inside-out and smartly firing home past Nick Pope with his supposedly weaker right foot.

City weren’t finished there though, Mahrez doubling his tally in first-half stoppage time after the hosts were awarded a penalty by VAR, replays showing that Sergio Aguero just got a foot to the ball ahead of Clarets defender Ben Mee who marginally made contact with the Argentine talisman.

Five minutes into the second half and Pep Guardiola’s side made it four with a goal straight out of the Man City playbook, academy graduate Foden producing a deliciously disguised pass into Bernardo Silva, who duly laid the ball across the six-yard box where it was poked home by David Silva.

Four became five just after the hour mark, the impressive Foden scoring his second of the game following another slick move from the hosts, the 20-year-old rounding off a resoundingly comfortable evening at the Etihad.

Foden was making just his fourth Premier League start of the season, and despite the three-month hiatus in football, the youngster admitted his side are already feeling ‘sharp’ after just two games of the restarted season.

“It is always good to play a part,” Foden told Sky Sports. “I am enjoying my football. The main thing is getting the result and how the team are playing. We are sharp.

“It is down to the whole team wanting to work hard. No matter who the manager puts in they do a job.”

Speaking of his excellent pass in the buildup to City’s fourth, Foden admitted that it was a move that had been practised on the training pitches, adding that his display was his best yet for the club.

“We worked on the set-piece to draw players out as well so I already knew where to play the pass. I am just glad it came off.

“I’d like to think that was my best game in a City shirt. I am still learning every day but I am happy to put performances in like that.”

The win means that City close the gap to league leaders Liverpool to 20 points, Jurgen Klopp’s side now unable to win the title with a win over Crystal Palace on Wednesday.

Poachers: Five of Football’s ultimate goalhangers and tap in merchants