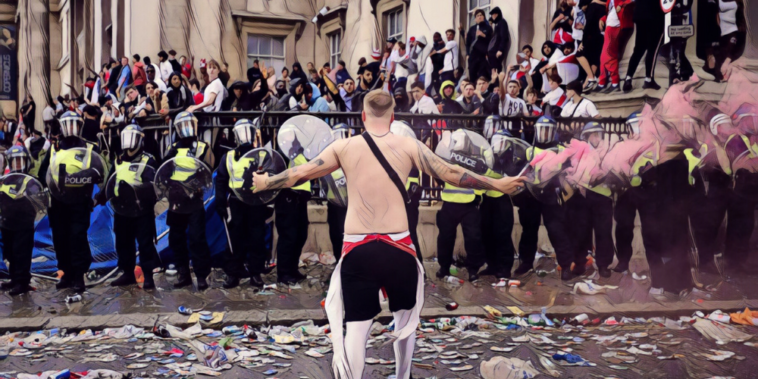 There were many reasons for English football’s day of shame last week, as a historic reaching of a major tournament final on home soil turned from pride and celebration into feral, drunken pandemonium.

Brexit must be considered an attributing factor because five years ago an elected government placed an ideology in front of its people, one that directly concerned national identity and how we felt about ‘others’ and asked us to pick a side.

We have not been the same since and from the toxic division it has caused and the heightened ill-feeling, patriotism has become corrupted to nationalism with a feeling from some, a feeling in their bones, that England is different and better. That unsettling certainty has never been more piqued in peacetime or in our lifetime.

The global pandemic is another cause of the social breakdown that saw thousands drink and fight and stick fireworks up their arse in Leicester Square, amidst a sea of broken glass, before converging on Wembley to force entry into the stadium.

At a time when social distancing is necessary for the public’s health, stewards and the police at one stage feared the over-crowding was becoming so severe a disaster was imminent. That’s before we consider the chaos and fear and scraps and loutish, menacing behaviour vomited across the concourses and in the stands.

In hindsight, a year and more of lockdown followed by an easing of restrictions that coincided with the release of 55 years of frustration at England’s sporting failures was a perfect, awful storm.

Which brings us onto more practical matters. Whatever possessed UEFA and the British government to allow 65,000 into Wembley in the first place, while England is experiencing yet another covid spike? As for the Metropolitan Police and Wembley itself to staff this momentous event so slightly, well that just defies belief.

UEFA, the Tories, the police and Wembley might well have ended up with blood on their hands. Instead, they are responsible for an untold number of imminent covid infections and, for a great many, memories scarred and forever haunted.

Yet does that excuse the yobs too much, for once again shaming in a shameless fashion a country they proclaim to be great and perhaps would stand a chance of being so again if only they collectively crawled under a rock and left the rest of us to it? It absolutely does, for all that the authorities are deserving of condemnation too.

The next morning we awoke to the sickening awareness that Bukayo Saka, Jadon Sancho and Marcus Rashford had been racially abused online for missing their spot-kicks – for becoming ‘bad immigrants’ at a stroke in polluted minds – and among a welter of headlines reflecting the previous day’s shit-show one from the French newspaper La Figaro stood out. “England football finds its old demons,” it read, clearly alluding to a recent past blighted by hooliganism, overt bigotry and nationalistic fervour.

Now it could be reasoned that football has never truly got its house in order and that trouble has not strayed too far from our national game, despite the perception that post-Italia 90 and with the introduction of the Premier League the sport has enjoyed a welcomed make-over, now family-friendly and seemingly wholesome. And certainly it can be acknowledged that even in the 21st century there are still situations to be avoided when attending matches, while there remains a depressingly real chance of hearing a racist insult hurled close-by.

Yet though we should not blindly believe that the ‘English disease’ has been cured these past two decades we can absolutely say that great strides have been taken. You can take your kids to games now and that matters a good deal. Would anyone have liked to have taken their child by the hand down Wembley Way last Sunday?

It can be argued that football these days reflects society as a whole; it’s good and bad elements along with the ugly. In the Seventies and Eighties however, it only mirrored the very worst of ourselves.

Are we retuning to such dark days? It feels like it and furthermore parallels with the past is stark, revealing that history is beginning to repeat itself.

In 1978 Margaret Thatcher claimed in a televised interview that ‘this country might be rather swamped by people with a different culture’, concluding that: ‘The British character has done so much for democracy, for law and done so much throughout the world that if there is any fear that it might be swamped people are going to react and be rather hostile to those coming in.’

A generation later we have a Prime Minister and Home Secretary who similarly share an unsavoury track-record for airing divisive rhetoric. When offered the open goal of condemning those who boo the taking of the knee Priti Patel described it as ‘gesture politics’.

Johnson meanwhile has previously committed to print an ascertain that ‘blacks have lower IQs’ and publicly yearned for the return of colonialism in Africa.

Barely believably it is a disunity that is most striking between the England national football team and some of the supporters who follow them over land and sea. And here we find another disconcerting parallel with the late-Seventies, only this time in the musical arena.

As Thatcher dictated a mean, intolerant and entitled small country that rejected inclusivity a movement called 2-Tone celebrated multiculturalism and progressiveness via post-punk, ska-infused brilliance. On stage bands diverse in race and gender such as The Specials and The Selector espoused hope and glory but in the crowd members of the National Front distributed their vile propaganda, attracted to the genre disingenuously because of a shared origin in skinhead culture.

And at England games now we see a similar discordance between the performing artists and those in attendance. The team has a social conscience, campaigning for school meals and a better understanding of LGBT issues. They are switched on and altruistic and all about the love.

The hardcore of the England support meanwhile – or at least the louder, more boorish element – are all about the hate. Booing knees being taken. Booing national anthems. Sending racist abuse to players for hitting the post.

It is all-too-easy to imagine the disdain the England lads have for these Neanderthals who judge their actions on the pitch – let’s not forget that Harry Maguire’s father was badly injured in the Wembley debacle – while the supporters presumably – and in actuality via their booing of the knee-taking – are equally repulsed by the ‘woke’ players they cheer on. How remarkably odd this is.

As any last remnants of feel-good factor disintegrated last Sunday the FA released an official statement that included the following, damning line – ‘These people are an embarrassment to the England team’.

What’s more, they are an embarrassment to the very country they hold in exaggerated esteem but don’t expect them to accept this any time soon. Not when they have the implicit backing of their government amidst a climate of cultural animosity.

The Three Lions may have lost on pens last weekend against Italy but still, regrettably the song held true. Because in front of our appalled eyes, English toxicity and entitlement came home.