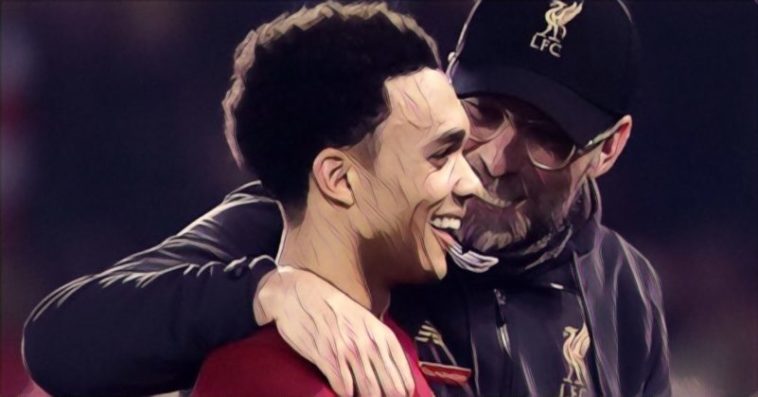 Anfield roared last Wednesday night to the sound of over 50,000 Liverpool fans enjoying the 5-0 thrashing of Watford.

The fans, players and the manager all needed a night like that, to blow away the cobwebs of recent weeks that have seen the title challengers looked laboured and ponderous.

Their showing against the Hornets was truly that of a team challenging to be champions of England as they blew their opponents away with relentless attacking football and a hunger for goals.

It was a performance that was in stark contrast to the past few weeks, as Klopp’s men visibly grew in confidence as the night wore on. The key difference in this outing was crystal clear; there was a quality and decisive end ball for Liverpool’s endeavours to flourish and four times on Wednesday night it came from their wonderfully gifted young full backs.

Trent Alexander-Arnold and Andrew Robertson are already firmly established in the eyes of the Anfield faithful as two of the club’s most important players. However, Wednesday night could well serve as a watershed moment when the great football fraternity switches on to just how lethal these lads are.

Alexander-Arnold, in particular, was top class. The local lad had the Kop on its feet and at just 20-years old, he possesses boundless tenacity and supreme confidence, which belies his age and his achievements in the game. A superb hat-trick of assists showed the England international is capable of prying open a back four with precisely weighted final balls and near nautical precision.

His crossing all night was causing Watford problems, but so too was his hunger to overlap and take advantage of a flank that was already being terrorised by Mo Salah. While Adam Masina and Craig Cathcart had their hands full, they could do little to prevent the space and time afforded to Alexander-Arnold as he flew forward with gusto and pinged balls across the Watford box all night.

It was a devastating display that was mirrored on the opposite side as Andy Robertson continued to bomb up and down his flank causing disarray and pockets of space to erupt all over the pitch for his colleagues to enjoy.

The importance of Liverpool’s full backs, to their attacking ambitions, cannot be down played in this season’s title race.  The pair have 16 assists between them and add so much dynamism and tempo to Klopp’s frenetic style of play.

It is no coincidence that the club’s recent rustiness has coincided with the absence of Trent Alexander-Arnold. Robertson will always be a menace from left back, but without his opposite number on the right, the club loses its oh-so effective pincer movement.

Without this deadly overlap, the fabled front three are easily ganged up on and there is less scope to take advantage of the space out wide. At Old Trafford, while Luke Shaw did a great job to keep Salah quiet, there was only the 33-year old James Milner to overlap and try to double up. While Milner is still a top player, you cannot deny he lacks the pace, distribution, and exuberance of Liverpool’s number 66. A crucial component was missing and it was abundantly clear that Liverpool were a different team without it.

It’s never ideal for any club to start getting wise after an event, but Liverpool has certainly been given much food for thought after Alexander-Arnold’s recent layoff. The youngster has already played a massive part in the club’s run to a Champions League final, and now this season’s title race. Despite his youth, he is crucial to Liverpool’s lofty ambitions, as is Robertson.

The club needs their top players fit and firing. There will be times when they will have to be managed and rotated, especially as this season’s title run-in looks set to go to the wire. However, a closer glance at what Liverpool have in reserve at full back is not very encouraging.

The site of Alberto Moreno appearing in any game of significance is enough to have any Liverpool supporter break out in bouts of sweaty nerves. The Spaniard has no place in a team trying to win the Premier League; neither does a stop-gap 33-year old who is better in midfield.

Liverpool will need to assess what they have in reserve in this position if they are to avoid an overreliance on Robertson and Alexander-Arnold. Some corners of their fan base lamented the loss of Nathaniel Clyne to Bournemouth in January, but while the former Southampton full back is a solid enough defensive option, he does lack that bombastic element to his game, and his distribution is below par. Again, Liverpool’s standards simply must be higher.

Their talented duo at full back is simply too valuable to be burnt out by playing in every game as such a demanding tempo. If they can find adequate squad players to come in and deputise to an appropriate level, then they can have an insurance policy against the kind of lull that we witnessed in recent weeks.

Full back has never been such a fashionable position as it currently is, and they may find recruits hard to come by, especially if they are not guaranteed to play every week. But it is something Klopp would be wise to address. It could be an investment that pays huge dividends in the future for the German.