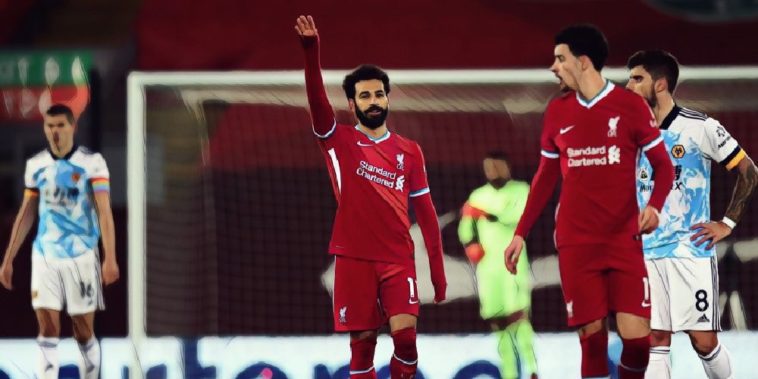 Liverpool welcomed their fans back to Anfield for the first time since being crowned champions, and treated them to a 4-0 win over a usually hard to beat Wolves.

It was a good start to the game from both sides, but Liverpool were somewhat gifted the lead in the 24th minute. Former Reds player Conor Coady for some reason decided to try control a long ball with his chest as opposed to clearing it with his head, allowing Mohamed Salah to pounce on the loose ball before drilling it past Rui Patricio for 1-0.

Wolves thought they were to be handed an opportunity to level the scores on the stroke of half time, referee Craig Pawson pointing to the spot for an apparent Sadio Mane foul on Coady, a decision which was overturned on review with Mane having pulled out of his attempted clearance and made no contact with the England international.

13 minutes after the break and the Champions doubled their advantage, a wonderful pass from Henderson inside his own half found Gini Wijnaldum, who advanced to the edge of the Wolves box without anyone putting in a challenge, before the Dutchman beautifully stroked the ball from the edge of the box into the top corner in front of the 2,000 jubilant fans in the Kop.

Two became three in the 67th minute, Henderson playing a short corner to Salah whose floated cross into the box was attacked by defender Joel Matip who thumped his header into the back of the net.

The scoring was completed 12 minutes from time as Nelson Semedo turned into his own net under pressure from Mane following a superb cross from substitute Trent Alexander-Arnold.

Speaking afterwards, Jurgen Klopp spoke at length about his feelings about the result and the return of fans.

“When we came out we all had goosebumps. I had no idea how it would feel. It was perfect. The noise, what the people did, they were on their toes you could see and feel and smell. They had waited so long for it.

“It is so much more enjoyable with people involved. Having people inside the stadium, hopefully we can build on that as a society, not just a football society. As long as nobody tells me someone was injured then it’s been a perfect night. Getting out of the dressing room for the warm-up, that was a proper goosebump moment.”

The German was also asked about Mohamed Salah after he scored one and created another: “He is an exceptionally good player. All the goals were exceptional. I loved the set piece goal.”