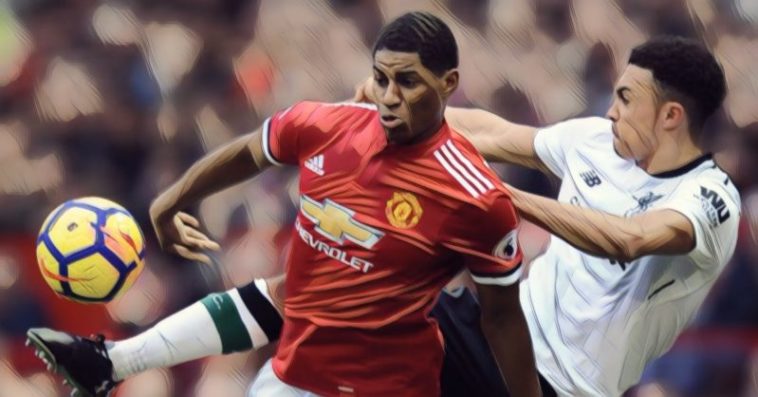 Liverpool face Manchester United this weekend in a highly anticipated fixture between the two north west rivals, English football’s most successful sides colliding at Anfield in the latest instalment of their fierce rivalry.

The two clubs have enjoyed sustained periods of dominance over the course of the past few decades, and the pendulum is currently swinging in favour of the Merseysiders who have a huge lead at the top of the Premier League.

The build-up to the fixture has been filled with combined XI’s, and it is difficult to argue with those including line ups based entirely of players from Jurgen Klopp’s European and world champions.

We’ve decided to take an alternative look at a potential combined team, however, giving chance to the young players currently emerging either side of the East Lancs Road.

Could Henderson be the man to replace David de Gea at Old Trafford?

The Spaniard’s aura has slipped considerably in recent times, and the once seemingly invincible shot-stopper may be looking nervously over his shoulder at a young goalkeeper currently shining at Premier League level.

Henderson is currently in his second season on loan at Sheffield United, and having helped the Blades to promotion last season has shown he is more than ready for the step up to top-flight level.

Chris Wilder’s side have thrived since returning to the big time, currently well in contention for a European place and proving one of the most solid defensive outfits in the division.

Only leaders Liverpool and top four contenders Leicester have a better defensive record at present, whilst no goalkeeper has kept more than Henderson’s eight clean sheets.

A contender for England’s squad for this summer’s European Championships, he could be set to rival De Gea next season.

The Liverpool defender is arguably the world’s finest full-back at present, his ever increasing importance to Jurgen Klopp’s side marking him out as one of the most promising young talents in football.

No player has provided more than Alexander-Arnold’s 20 Premier League assists since the start of last season, the West Derby-born academy graduate emerging as the creative force behind the world and European champions.

His dictating of the play from a previously unfashionable position has transformed people’s perceptions of the modern full-back, the 21-year-old’s delivery from either open play or set-pieces making him a potent weapon from the flank.

The youngest player ever to start consecutive Champions League finals, Alexander-Arnold’s is set for a huge future in the game.

Gomez has enjoyed somewhat of a rollercoaster Liverpool career since arriving from Charlton as a teenager in 2015, a series of serious injuries hampering his ability to become an automatic first-team starter.

That said, when fit, the England international has shown himself to be one of the best young defenders in the Premier League, forming a solid partnership with Virgil van Dijk at the heart of the Reds’ defence and filling in at full-back on occasion.

Quick and powerful, Gomez has all the attributes needed of a modern defender and will surely only improve in the coming seasons alongside Van Dijk. Likely to be included in the England squad for this summer’s European Championships, the 22-year-old has a strong chance of earning a starting position if he continues to perform well, with Gareth Southgate unsure of his best defensive partnership at present.

Manchester United fans will have been frustrated to have seen Tuanzebe’s injury problems this season, with several of the Old Trafford support having championed the inclusion of the powerful defender in their first choice XI.

Victor Lindelof’s inconsistencies could open the door for the 22-year-old alongside captain Harry Maguire should he manage to prove his fitness, the youngster having shone during a loan spell in the Championship with Aston Villa last season.

Capable of also operating at full-back and in midfield, Tuanzebe could prove to be an important member of Ole Gunnar Solskjaer’s developing squad in the coming seasons.

The latest in a long line of academy graduates to come through the ranks at Old Trafford, Williams has capitalised on injuries to Luke Shaw and quickly found his feet at first-team level to become a regular inclusion in recent weeks.

The 19-year-old’s committed style has quickly won admirers on the terraces, whilst his pace and direct running have offered a threat not recently seen in some lacklustre displays from the more senior Shaw.

Already a favourite, Williams signed a new long term deal in October and will now hope to continue making an impression as he bids to establish himself as a fixture in the squad.

Could Manchester United be about to lose one of their best prospects?

The first player born in the 2000’s to represent the club, Gomes made his debut as a substitute against Crystal Palace in 2017, becoming the youngest player since Duncan Edwards in 1953 to make their first-team bow.

Part of the England team alongside the likes of Jadon Sancho and Phil Foden that won the U17 World Cup almost three years ago, Gomes has watched as those international teammates have begun to flourish.

Since that record-breaking debut, however, it has been a rather frustrating period despite his evident talents, making just nine further senior appearances to spark talk of an exit at the end of his contract this summer.

The diminutive 19-year-old is a creative influence with the ability to dictate play, and now feels he is ready for senior action whether that comes at United or not.

The Toxteth-born talent made the headlines earlier this month, scoring a stunning winner as Liverpool beat Merseyside rivals Everton in the FA Cup third round at Anfield – becoming the club’s youngest derby scorer since Robbie Fowler in 1994.

Jones has long been lauded as a promising talent in the club’s academy ranks, and at just 18-years-old has now reached a stage where first-team football may be required to further develop his potential.

Jurgen Klopp is a big fan of the creative, goalscoring midfielder, who is amongst the leading scorers in both the Premier League 2 and UEFA Youth League this season.

A current Liverpool prospect enjoying time away from the north west, Welsh international Wilson is earning the chance to play regular Premier League football during a season-long loan spell at Bournemouth.

The 22-year-old has won plaudits for his brilliance from set-piece situations so far this season, scoring sensational free-kicks against the likes of both Manchester City and Tottenham.

Possessing a wand of a left foot the youngster prefers to play from the right-hand side, though also has the ability to operate centrally and create chances for grateful teammates.

Having demonstrated his goal threat with 16 goals in the Championship during a similar spell at Derby last term, Wilson has shown he can find the net at the top level with six goals in just 15 starts.

The Welshman will hope his performances can earn a place in Jurgen Klopp’s squad next season, and his ‘x-factor’ could provide the Reds with a different option.

Nothing quite terrifies defences like pace, and James has it in abundance.

An unheralded signing from the Championship last summer, James would quickly endear himself to his new club with a goal on debut against Chelsea, whilst his electric and energetic style has seen him impress in Ole Gunnar Solskjaer’s counter-attacking style.

The 22-year-old is still raw and playing his first season at this level, but three goals and six assists so far are a promising start for a player who has the attributes to become a genuine threat from either flank.

Despite suffering a dip of form and goal drought recently, James has proven a shrewd investment and has the potential to become a key part of the United squad.

Every so often, a teenage talent bursts onto the scene that gets football fans feverish in excitement.

This year, Manchester United’s Mason Greenwood has taken that role, the precocious 18-year-old providing glimpses of the ability that has seen him regarded as one of the brightest talents in European football.

Described by Solskjaer as a ‘natural goalscorer’, Greenwood has hit nine goals in all competitions so far this season and his effortless style and finishing ability has been compared to United great Robin van Persie.

England recognition has already been talked up for a player with just two Premier League starts to his name, an indication of the impression Greenwood has made thus far.

Whilst those calls may be perhaps premature, he certainly has the talent to be a future star for club and country.

Believe it or not, Marcus Rashford is still just 22-years-old.

The England international may be firmly established for both United and the national side, making over 200 appearances at club level, though he does not turn 23 until later this year.

Having burst onto the scene with two goals against FC Midtjylland in the Europa League before repeating the feat against Arsenal just days later on his Premier League bow, Rashford has become a key figure at Old Trafford over the past five seasons and elevated his game to new levels this year.

The Wythenshawe-born star is currently enjoying the most prolific campaign of his career with 19 goals in all competitions thus far, the homegrown hero seemingly on an upward trajectory to the top of the game and quickly becoming a leader in an emerging United side.