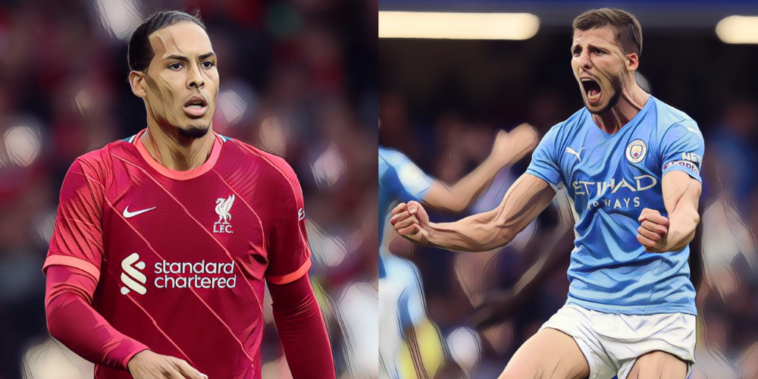 Liverpool meet Manchester City this weekend as the Premier League’s top two go head-to-head at Anfield, an early season encounter that will test the title credentials of both sides.

The two teams have enjoyed an increasing rivalry in recent campaigns as the duo have become direct competitors for major trophies, sharing each of the past four Premier League titles between them.

Some of the Premier League’s finest talent will be on show on Merseyside on Sunday, and ahead of the clash we’ve compiled our best Liverpool and Manchester City combined XI.

Alisson and Ederson have contested for the position as Brazil’s number one in recent years, comparisons between the duo rarely far away.

Both are amongst the very best the Premier League has to offer, though we’ve sided with Ederson in our combined XI.

Winner of the Premier League’s Golden Glove in each of the past two seasons, the 28-year-old has been responsible for a shift in both City’s play and perceptions of how goalkeepers are viewed since arriving at the Etihad.

His kicking is unrivalled amongst goalkeepers in world football and provides Pep Guardiola’s side with a unique weapon over both short and long distances.

We’ve chosen to only include players available for selection this weekend, giving Kyle Walker a free run at the right-back role in Trent Alexander-Arnold’s absence through injury.

The latter has enjoyed a superb start to the season and will be a huge miss for the Reds, with Alexander-Arnold leading the league for crosses, key passes, and passes into the penalty area this season.

Walker remains amongst Guardiola’s most trusted lieutenants however, whilst he also remains ahead of Alexander-Arnold in the pecking order for Gareth Southgate and England.

Walker has evolved under the tactical guidance of Guardiola in recent seasons and his pace – whilst a little tedious to refer to – is a huge asset for Man City at both ends of the pitch.

Manchester City’s defensive rock and a player who helped transform a weakness into a major strength, Ruben Dias’ impact on the club’s 2020/21 title-winning season was rewarded with the FWA Footballer of the Year award.

This season the Portugal international has continued to lead Guardiola’s backline, with City having conceded just one goal across their six league fixtures to date.

The underlying statistics point to that record continuing with City’s expected goals against (xGC) of 2.69 comfortably the lowest in the Premier League so far this season.

Dias is a commanding and assuring presence at the heart of the City defence, his signing having proven a masterstroke for the club’s recruitment team.

Dias’ impact at the Etihad has been likened to Virgil van Dijk’s transformation of Liverpool following his move from Southampton, with the Dutch international having developed into arguably the world’s best centre-back on Merseyside.

The 30-year-old’s absence for the majority of last season through injury was a major blow during a disappointing defence of the title, but his return to the side has raised optimism about a sustained challenge this time around.

Van Dijk ranks amongst the Premier League’s leaders for aerial duels won and clearances so far this season, the domineering Dutchman having regularly thwarted the division’s best forwards in recent campaigns.

Andy Robertson starts at left-back in our combined side, despite the form of Joao Cancelo with the Portugal international having admirably filled a problem position for Pep Guardiola.

However, Robertson remains arguably the Premier League’s best in his position, combining endless energy with a defensive tenacity and dangerous deliveries from wide.

The Scotland captain has provided 30 assists across the past three full seasons for Liverpool, whilst his overlapping runs are essential to a side who play with a narrow forward line, his partnership with Sadio Mane a key component of the Reds’ attacking play.

Fabinho anchors the midfield for our combined XI, with the Brazilian crucial to Liverpool and a player who will have a major role in this weekend’s crucial clash.

Having deputised at centre-back during the Reds’ defensive crisis last season, his return to midfield provided the platform for an unbeaten run that ensured Champions League qualification.

The 27-year-old is a brilliant reader of the game and snaps into challenges, his ability to shut down attacks and start Liverpool’s own making him an indispensable figure in Klopp’s midfield trio.

Named as the Premier League’s finest footballer in each of the past two seasons, De Bruyne’s coronation as the PFA Player of the Year in 2020/21 saw him join only Thierry Henry and Cristiano Ronaldo to have won the award in successive seasons.

The Belgian’s brilliance has become almost routine in recent seasons for City, with the midfielder averaging an assist every 167 minutes last season and reaching double figures for goals provided in four consecutive campaigns.

The 30-year-old is still working his way back from injury at present, but a clash with Liverpool at Anfield would be the perfect time for De Bruyne to return to his devastating creative best.

Bernardo Silva looked set for an exit from Manchester City during the summer transfer window, but the financial impact of the pandemic meant that suitors were not forthcoming.

Having remained with the club, Silva has since forced his way back into Guardiola’s plans and has started the new campaign in superb form.

The Portugal international covers every blade of grass and his mix of graft and guile makes him tailor-made for City’s midfield three, with the midfielder outstanding during last weekend’s win at Chelsea.

Is there a Premier League player in better form right now?

Mohamed Salah has started the season in scintillating form for Liverpool, scoring eight goals in just eight appearances across all competitions.

Five of those goals have come in the Premier League with the Egyptian leading the early running for the Golden Boot, and Salah will be looked to once again to make a difference against City this weekend.

6 – Mohamed Salah has scored in each of his last six appearances for Liverpool in all competitions; the first time a player has netted in six in a row for the club since April 2018, when Salah himself scored in seven consecutive games. Irrepressible. pic.twitter.com/l4OhKXfm5W

Salah’s goal record often dominates the headlines, but the opening weeks of the season have seen the 29-year-old showcase the vast array of attributes he possesses, combining a relentless work rate with both a creative and clinical touch.

Jack Grealish starts on the left of our combined XI front three, edging out Sadio Mane despite the superior goal threat the Liverpool forward provides.

Grealish has already made himself an important figure in Pep Guardiola’s plans and has started each of Manchester City’s six league fixtures so far this season, leading the Premier League for key passes (jointly) and shot-creating actions in 2021/22 to date.

The 26-year-old’s 16 chances created are almost double the amount Mane has managed, whilst he also betters the Senegalese star for forward passes, take-ons completed, tackles, fouls won, and ground duels won this season.

Manchester City’s failure to lure Harry Kane to the Etihad has seen Pep Guardiola hand several stars an audition at centre-forward, with Raheem Sterling, Ferran Torres and Gabriel Jesus having shared duties so far this season.

We’ve chosen Liverpool’s Diogo Jota to lead the line in our combined side, however, with the Portugal international having started the campaign with an impressive three goals in just six appearances.

The absence of Roberto Firmino has provided Jota with an opportunity alongside Sadio Mane and Mohamed Salah, one which he has taken with the forward’s hard-running and instinctive finishing having impressed since his move to Merseyside.