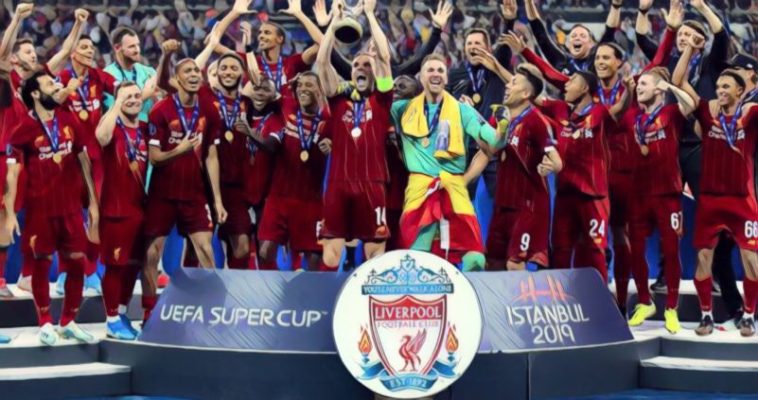 An entertaining, closely contested match in trying, humid conditions, was ultimately settled on penalties after finishing 2-2 in extra time. It was Liverpool who edged it 5-4 after a tense shoot-out.

Chelsea new boy Christian Pulisic was in real eye-catching form during the opening 45 minutes of this lively encounter. The 20-year-old American was full of movement, pace, and energy as he punished Liverpool’s vulnerable high line.

The £58 million man played a lovely ball into Giroud for the opener before having his own first-half effort rubbed out for offside.

It was an encouraging display from the youngster, which Frank Lampard would have enjoyed from the sidelines. Pulisic is one of the few new faces at his disposal this season and really took to the big occasion against top-class opposition.

Much was made of Lampard’s call to omit the experienced Olivier Giroud from his side’s heavy defeat to Manchester United on Sunday.

The former Derby boss was clearly keen to remedy that against Liverpool as he threw the former Arsenal forward in to lead his line. The veteran 32-year-old duly responded and once again showed his big-game mentality with his 12th goal in 16 European appearances for Chelsea.

Lampard was also able to recall N’Golo Kante, with his number seven returning to the fold and playing a key part in Chelsea’s energetic high pressing display, which left Liverpool on the back foot and genuinely wobbling in the first 45 minutes.

Pedro was also excellent as he put in a smart pressing shift for his side and covered virtually blade of grass on the pitch for the Stamford Bridge outfit.

The silky Brazilian was introduced at half-time to inject some life into Liverpool. The 27-year-old showed his class yet again for the Reds and played a major role in his side’s revival.

Firmino bagged two excellent assists for Sadio Mane and visibly took Liverpool up a gear with his clever work rate and top-class ability on and off the ball.

However, Klopp may well be suitably worried by how flat his team looked for large parts of the first-half, without their influential number nine.

With just 72 hours to prepare for the next match against Southampton and many of his first-team players drained after a tiring night, Klopp will need his fringe players to step up and put a shift in if he is to avoid an over-reliance on his celebrated front three.

It was a landmark night in Istanbul with Stephanie Frappart becoming the first female to officiate in a major men’s European match.

VAR was also under scrutiny on the night and once again, it left more questions than answers at the end of the match. Early on, a pretty clear handball shout on Andreas Christensen after Sadio Mane’s acrobatic effort looked to have hit his arms in a high, unnatural looking position, came to nothing despite being checked.

The technology was also under the spotlight in extra time as Tammy Abraham went down in the penalty area after bearing down on Adrian’s goal. Frappart awarded a harsh looking penalty, with seemingly minimal contact from Liverpool’s goalkeeper.

The decision was checked but it did little to clear things up, with the resulting replays only confirming that there was hardly anything in it. The penalty stood, as a clear and obvious error could not be proven and Liverpool were left to feel aggrieved over the type of incident we all hoped to have seen the back off.

Keepers have their say on events in close run game

For Chelsea’s Kepa Arrizabalaga, it was something of a bitter-sweet night for the 24-year-old Spanish stopper. He looked sharp and alert all night between the sticks and his double save in the second-half to deny first Mo Salah and then Virgil van Dijk’s follow up was top class as he kept his side in the match.

In fact, the young Spaniard made nine saves in the game as he helped keep Liverpool at bay. However, he will feel frustrated to have not saved Divock Origi and Trent Alexander-Arnold’s efforts in the shoot out as he got a hand to both shots but couldn’t keep them out.

At the other end, it was Liverpool’s stand-in keeper Adrian who was the hero. He could little about the two goals he let in during the match but looked sharp to danger all night. His save from Tammy Abraham to win the cup for the Reds was a real moment for him to savour as the former West Ham man looks to do his bit as Liverpool’s interim number one.