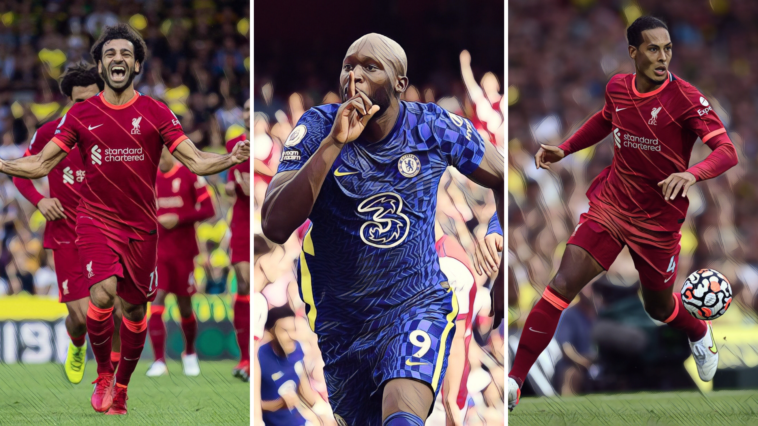 Liverpool host Chelsea in the Premier League this weekend in a clash that could have huge implications on the title race, both sides having began the new season in fine form with successive wins.

The fixture will be the latest instalment in a rivalry that has continued to grow since the turn of the century, whilst it will also involve the sub-plot of Jurgen Klopp and Thomas Tuchel going head-to-head in a battle between the former Mainz and Borussia Dortmund coaches.

Ahead of Saturday’s showdown at Anfield, we’ve picked out Liverpool and Chelsea combined XI.

Edouard Mendy has been a fine signing for Chelsea since his arrival from Rennes and boasts a brilliant clean sheet record, but it is Alisson who takes the number one shirt in our combined side.

The Brazil international has largely been imperious since signing from Roma in 2018 and has recovered from a testing period last season to cement himself again as arguably the division’s best goalkeeper.

The 28-year-old has been crucial to the Reds’ successes in recent seasons and has started the new campaign in strong form, keeping successive clean sheets in wins over Norwich and Burnley.

The two teams boast two of England’s finest options at right-back in Reece James and Trent Alexander-Arnold, the latter edging out his international teammate and Cesar Azpilicueta for our position at right-back.

Alexander-Arnold – like many of his teammates – performed below expectations last term, but there have been signs the 22-year-old is recapturing his best form including a brilliant performance against Burnley last time out.

No defender across the past six Premier League seasons has created more chances than Alexander-Arnold did against the Clarets (7), whilst only Kevin De Bruyne has created more clear-cut goalscoring chances in the division since August 2018.

Chelsea’s improvement under Thomas Tuchel has been based around a solid foundation, with the renaissance of Antonio Rudiger a major factor behind the Blues’ solidity.

The Germany international has returned to favour after being frozen out under the previous regime, producing a number of excellent showings as part of Chelsea’s back three system.

Chelsea will be keen to secure a new contract for the 28-year-old, who has been one of the Premier League’s best defenders since Tuchel’s appointment earlier this year.

Virgil van Dijk’s return to the Liverpool side is set to make a huge difference to Jurgen Klopp’s team, the influential defender having been sidelined for the majority of last season with a serious knee injury.

Van Dijk has established himself as arguably the best centre-back in world football since making the move to Merseyside, winning Champions League and Premier League winners’ medals.

Dominant in the air, a natural leader, and possessing a fine passing range from deep, his return provides the Reds with a presence at centre-back that was missing last season.

Andy Robertson could return to the Liverpool side this weekend after missing the club’s opening fixtures, in what would represent a huge boost to the Reds’ chances against Chelsea.

Robertson and full-back partner Trent Alexander-Arnold are integral to the Merseysider’s style and system, providing width, creativity and a constant supply of ammunition.

Robertson has provided 30 assists over the past three Premier League campaigns, whilst he ranks fourth across the entire division for clear-cut goalscoring chances created across that same period.

Most Premier League assists by a defender since the start of the 2018/19 season:

The Scotland captain remains arguably the best left-back in world football and is selected ahead of Ben Chilwell and Marcos Alonso, with neither player able to guarantee their place in the Chelsea XI at present.

N’Golo Kante has looked back to his brilliant best in recent months for Chelsea, the indefatigable star often resembling a one-man midfield.

Kante was a central figure in Chelsea’s run to Champions League success last season, starring as the west Londoners defeated Atletico and Real Madrid on their way to the final.

The France international’s dynamism and incredible ability to regain and recycle possession continues to enhance his reputation as one of the best defensive midfielders of the modern era.

Jorginho’s role in the Chelsea side was once questioned, but there are few who now dispute the importance of the Blues’ midfield metronome.

The Italy international has enjoyed an unforgettable 2021 after lifting both the Champions League and European Championship, conducting the play for club and country from a deep role in front of the backline.

The metronomic presence of Jorginho may not always catch the eye, but his setting of the tempo ensures he remains a crucial cog in Chelsea’s title-hunting machine.

Mason Mount’s growing influence on this Chelsea side was acknowledged last season with the club’s Player of the Season accolade, a fitting tribute following a career-best season for the home-grown midfielder.

Mount finished last season with an impressive 18 goals involvements (9G/9A) in all competitions, but it is the midfielder’s underlying statistics that best demonstrate his impact with only Bruno Fernandes ranking higher in the Premier League for key passes and shot-creating actions.

Mount’s inventive qualities are matched by an industrious work-rate and intelligence out of possession, a combination that makes the 22-year-old a firm favourite.

Mohamed Salah’s frightening consistency shows no sign of slowing, the Egyptian off the mark for the new season and looking primed for another huge campaign.

Salah has provided 175 goal involvements in just 205 appearances since signing for Liverpool, whilst no player has scored more Premier League goals than the 29-year-old since his Anfield arrival.

Just four short of a century in the division for the Reds, the forward will no doubt be relishing the chance to add to his haul against former club Chelsea, who must surely regret cutting their losses on an inexperienced Salah as a youngster.

Sadio Mane will be looking to recapture his best form during the current season, with the Senegal international having dovetailed in tandem with Salah and Roberto Firmino in recent seasons at Liverpool.

Mane scored his 50th league goal at Anfield during the 2-0 win over Burnley last weekend and is now just two short of reaching 100 goals in all competitions for the Reds.

Sadio Mane is the 5️⃣th player to score 50 home goals for Liverpool in the #PL#LIVBUR pic.twitter.com/6IKSktVXye

Mane’s partnership with Robertson down the Liverpool left often works to devastating effect, with the former looking to use his explosive acceleration to burst inside and into goalscoring positions.

Chelsea’s record signing got off to a dream start on his second debut for the west Londoners, scoring the opening goal in a man-of-the-match performance at Arsenal last weekend.

Having perhaps been an under-appreciated presence during his last Premier League spell, Lukaku is now tasked with spearheading Chelsea’s assault on the title this season.

Romelu Lukaku waited nearly a decade to score for Chelsea.

It meant the world when he finally did 💙 pic.twitter.com/IajNTlFBUe

Two seasons at Inter Milan – which delivered a Serie A title and 64 goals in just 95 appearances –  have helped develop the Belgian’s game and he returns to England as a better player, one with a point to prove and amongst the favourites for the Golden Boot.

His battle with Virgil van Dijk this weekend shapes as one of the most fascinating personal duels of the campaign.