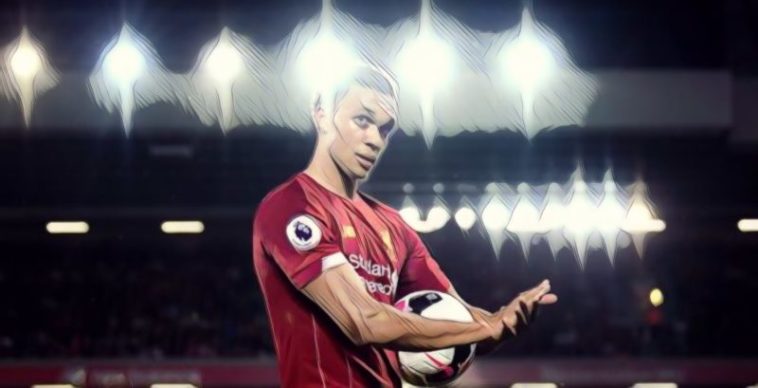 Trent Alexander-Arnold continued his rapid rise into Liverpool folklore this week, the full-back providing his tenth Premier League assist of the season for Jordan Henderson’s goal in the win at Wolves.

In doing so the academy graduate became the first Reds player to twice reach double figures for assists in a single Premier League season, whilst also becoming the first ever defender in the division to do so.

Ten other players have reached double figures whilst wearing the club’s colours in the Premier League era, and we’ve decided to look back and rate each of the players to have achieved the feat.

One of the greatest players in the club’s history, Barnes’ best years would come before the Premier League, though he would still prove to be an influential figure on Merseyside during the opening seasons of the rebranded top flight.

Having been converted from a goalscoring winger into a more creative central role, Barnes would be the experienced figure behind a young Red’s side in the mid-nineties, and provided 10 assists during the 1995/96 season as the club finished third.

Amongst those was an assist for Stan Collymore’s dramatic winner in the 4-3 victory over Newcastle at Anfield, a game many regard as the greatest in Premier League history.

Only teammates Steve McManaman and Stan Collymore provided more than Barnes’ 10 assists that season, the club legend still effective well into the twilight of his Liverpool career.

Signed for an English record fee of £8.5m from Nottingham Forest in 1995, Collymore would initially enjoy a strong start to his Liverpool career, scoring prolifically and striking up a strong partnership with Robbie Fowler in attack.

His debut season would see him join a free-scoring frontline and score 14 league goals, including that aforementioned winner against Newcastle, whilst providing a further 11 assists as Liverpool finished third in the Premier League.

Off-field incidents and the emergence of Michael Owen would soon see him moved on after just two seasons, however, Collymore departing for Aston Villa after scoring 35 goals in just 81 appearances.

Liverpool would remarkably have three players all register double figures for assists in 1995/96, with local lad McManaman leading the way in the Premier League with 15 assists.

The Kirkdale-born winger would join the club as a 16-year-old and quickly establish himself in the first-team, developing into one of the best creative talents in the top flight, possessing an ability to ghost past players at will and create opportunities for his grateful teammates.

Named amongst the shortlist for the PFA Player of the Year for three consecutive seasons between 1995 and 1997, McManaman would be the creative hub of a side that would ultimately fail to deliver much in the way of major honours, winning the League Cup and FA Cup once apiece.

Despite that lack of silverware, he would be regarded amongst the most talented midfielders of his generation, creating 112 assists in 272 Premier League appearances before leaving for Real Madrid on a free transfer.

That move to the Bernabeu at the peak of his powers would lower the esteem in which he was held on Merseyside somewhat, though two Champions League successes during his time in Spain were evidence of his undoubted talents.

Michael Owen may have been more widely recognised as a goalscorer, but he was amongst the division’s leading creators during a stunning first full season as a Liverpool player, the teenager providing ten assists and winning a share of the Golden Boot with 18 goals.

That season would see him named as Premier League Player of the Season and as the PFA Young Player of the Year, and after starring in that summer’s World Cup with England he would continue to be the focal point behind a series of successes for the club around the turn of the millennium.

Owen would score 158 goals in 297 appearances for the club, helping the Reds to a treble of cup successes in 2001 and being named as the recipient of the Ballon d’Or later that year – becoming the first Liverpool player to receive the honour and the second-youngest winner of the award in it’s history.

He would leave for Real Madrid in 2004, later returning to the Premier League with Newcastle, Manchester United and Stoke, though his finest seasons were undoubtedly his early years at Anfield.

Love him or loathe him, Luis Suarez was one of the finest footballers in the Premier League during a memorable three-and-a-half year stay at Liverpool.

Arriving as a replacement for outgoing fan’s favourite Fernando Torres, Suarez started slowly despite a goal on his Anfield debut, but soon developed into one of the world’s very best.

His finest season would come as Brendan Rodgers’ Reds narrowly missed out on the league title in 2013/14, Suarez scoring 31 goals in just 33 appearances and providing a further 12 assists.

Those performances saw him claims a host of individual accolades at the season’s end, including a Footballer of the Year double and the Premier League’s Golden Boot.

A series of controversial incidents would mean memories of the street footballer from Montevideo will be tainted, but there can be no denying the unique talent of a forward who lit up Anfield during his brief stay in English football.

A generational talent who would become symbolic for Liverpool during an era of much mediocrity, Gerrard was the local lad who became the face of the Merseyside club throughout his career.

Having formed part of the side which won a treble of cup competitions at the turn of the millennium, Gerrard would be named captain shortly after, and went on to memorably inspire the side to League Cup, Champions League and FA Cup success.

The closest he would come would be during the 2013/14 season as the club narrowly finished as runners-up to Manchester City, Gerrard’s unfortunate slip against Chelsea one of the iconic images of a campaign in which he had previously starred – providing 13 assists from a deeper role to a prolific forward line containing the aforementioned Suarez and Daniel Sturridge.

Named as the PFA Players’ Player and Football Writer’s Footballer of the Year during his career, his eight inclusions in the PFA Team of the Year is a divisional record.

One of the great Premier League’s best Bosman transfers?

Liverpool would secure the services of the out-of-contract Manchester City midfielder in 2015, Milner immediately finding a home on Merseyside and being installed as the club’s new vice-captain upon his arrival.

Recognised as one of the best professionals in the division, Milner’s standards of excellence have helped lead a developing team under Jurgen Klopp in recent seasons.

Deployed in his preferred central role after spending much of his City career on the flanks, Milner would provide 11 league assists during his first season at the club, his energy and drive bringing a new dimension to the Reds midfield.

His versatility has once again been a huge asset to Klopp’s options, Milner helping the club to Champions League, UEFA Super Cup and Club World Cup success in 2019.

At 34-years-old he continues to play an influential role in a Liverpool side currently on course for an elusive league title, the Leeds-born veteran one of the club’s best pieces of business of modern times.

Few anticipated the impact Mohamed Salah would have at Liverpool following his £34m arrival from Roma in 2017, the Egyptian having developed from Chelsea cast-off to one of the finest forwards in world football.

Salah would enjoy a stunning debut season on Merseyside and would break a whole host of goalscoring records, scoring 32 times in the Premier League for Jurgen Klopp’s side – a record for a 38-game season.

That season would also see him register 10 Premier League assists and his incredible campaign would see him scoop a PFA Player’s Player of the Year and FWA Footballer of the Year double in addition to the league’s Golden Boot.

His current record stands an impressive 86 goals in 134 appearances, with Liverpool set to enjoy the peak years of a player who has helped the club to Champions League, UEFA Super Cup and Club World Cup success over the past year, Salah a talismanic figure for arguably the best club side in world football at present.

One half of Liverpool’s current flying full-back duo, Robertson has enjoyed one of the best rags-to-riches stories of modern times.

The Scotland international would rise from playing part-time football to joining Liverpool within the space of four years, and after a slow start would establish himself as a key figure and firm fan’s favourite.

Robertson’s effervescent energy has endeared him to the club’s supporters and he has developed into arguably the world’s finest in his position, solid defensively and a dangerous threat when raiding forwards.

His left-footed delivery would help him register 11 Premier League assists last season, whilst he is well on his way to matching that tally with six for the season so far.

Champions League, Super Cup and Club World Cup success have all come the popular full-backs way over the course of the past year, with further silverware likely given the club’s performances of late.

The first Liverpool player to twice reach double figures for assists, Alexander-Arnold continues to reinvent how modern full-backs are considered with his performances for Jurgen Klopp’s side.

Blessed with energy, dynamism and sublime technique, the 21-year-old acts as deep-lying playmaker for the Reds, whilst his delivery either from set-pieces or open play mark him out as a potent weapon from the flanks.

Rarely do defenders come into the team at a young age and thrive, but Alexander-Arnold has looked a seasoned pro ever since his first appearances in the red shirt he grew up dreaming about wearing.

Football fans love nothing more than seeing one of their own succeed, and the boyhood fan is currently living out the dreams of those on the terraces.

His list of accolades and silverware is already impressive, though he is likely to rise further up these rankings in the coming years, Alexander-Arnold set to be a key figure in the Liverpool side for the next decade.