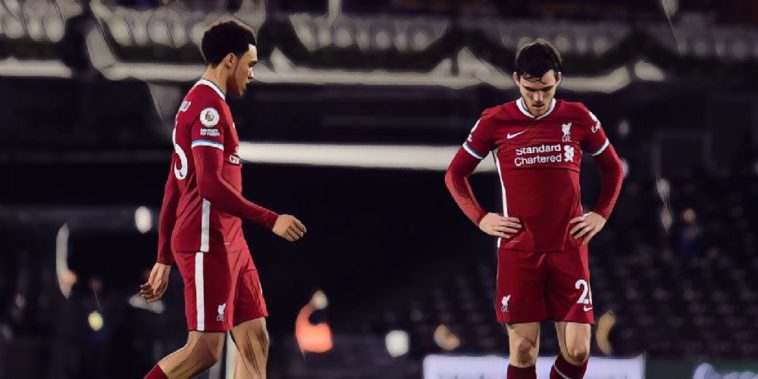 Liverpool missed the chance to move two points clear at the top of the league after being held to a 1-1 draw against a struggling Fulham side.

It was an uncharacteristically sloppy start from Liverpool, while Fulham were on it from the first whistle, with Ivan Cavaleiro spurning an early one-on-one with returning Reds ‘keeper, Alisson.

17 minutes in and the hosts had a very credible shout for a penalty, make-shift centre-back Fabinho going through Cavaleiro to get to the ball, though after reviewing the footage, referee Andre Mariner stook with his decision to award a corner.

Eight minutes later though and Fulham bagged themselves the lead that their early play deserved, the Premier League champions making a mess of clearing a corner, and as they tried to push out, the ball dropped to Ruben Loftus-Cheek, who laid the ball off to Bobby Decordova-Reid before the 27-year-old rifled his effort across Alisson’s goal and into the far corner from the edge of the box.

Liverpool were much improved after the break, though Jurgen Klopp’s side still struggled to break down a dogged home defence, while Alphonse Areola produced a fine save to his right to deny Jordan Henderson.

A huge performance against the champions. 👊 pic.twitter.com/GkWRYIC9NJ

However, the host’s resistance was finally broken in the 79th minute as Mohamed Salah netted from the spot after the ball struck the elbow of Aboubakar Kamara from a free-kick.

Liverpool continued to press towards the end, but never really looking like actually breaking down the home side, and speaking afterwards, Jurgen Klopp suggested he was surprised by Fulham’s approach to the game, while admitting his own side’s football wasn’t good enough for the majority of the first half.

“I am not frustrated anymore about that [Liverpool’s start to the game], but you are right: it took us half an hour to get going and that, of course, makes the game more difficult,” he told the media in his post-match press conference.

“It was the first time supporters were here for a long, long time and obviously [they] created an atmosphere. We helped Fulham a lot to create that atmosphere, actually. They obviously played differently to the way they usually play; a lot of direct balls, Loftus-Cheek second ball, high ball fight and these kind of things. A lot of free-kicks – I think there were a lot of set-pieces in the first half.

“That’s how it is. With the ball I didn’t like our game, but there was a lot of loud shouting from outside from all the coaches, so we could solve that a little bit in the first half – like for 15 minutes – but then half-time helped massively and the second half was much better.

“I think in the first half an hour we could have lost the game, in the last 60 minutes we should have won it. In the end we get a point and that’s it.”

The result means Klopp’s side failed to take advantage of Spurs’ earlier 1-1 draw with Crystal Palace, with Liverpool set to host Jose Mourinho’s side at Anfield in midweek in an intriguing top of the table encounter.

See also – The latest piece of the puzzle: Why Diogo Jota is thriving at evolving Liverpool