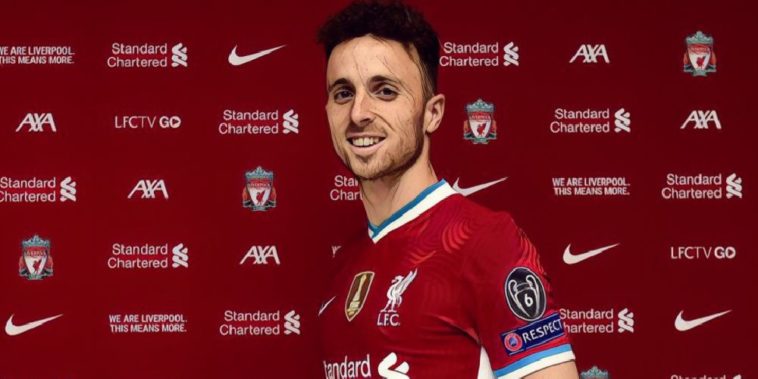 Pep Lijnders has claimed that Diogo Jota is at the same level as Liverpool’s electric front three of Mo Salah, Sadio Mane and Roberto Firmino, calling the clubs latest signing a ‘pressing monster’.

The Portugal international sealed a £41m move to Anfield last week to become the club’s third major summer signing, Jota having impressed since his arrival at Wolverhampton Wanderers back in 2017.

The 23-year-old looks to be an astute purchase due to his ability to play anywhere across the front three and can fill in for Salah, Mane or Firmino when required.

Despite being unlikely to usurp any of those three stellar names in the short-term, Liverpool assistant boss Lijnders believes that the club’s new acquisition is at a similar ‘technical level’ as the aforementioned trio and should be able to quickly adjust to their high press style of play – the Dutchman having been aware of the player since his early days in Portugal.

“What can I say? His technical level is on the same as our front three,” said Lijnders. “He has so much future in the game and he will have a great pathway inside our club. He’s like a pressing monster, so he will fit in straight away.

“We played against each other when he was very young. In Portugal, they all say what a great signing Liverpool made, because they know exactly how he is and what kind of potential he still has.

“He will fit into our style. We are happy with him, and all the things we heard are true. He is a very professional, passionate, dedicated, brave player.”

The Reds have already made a strong start to the season with back-to-back wins and could make it three wins from three on Thursday evening, as they face League One side Lincoln City in the Carabao Cup – a game which could see the former Wolves man make his Liverpool debut.