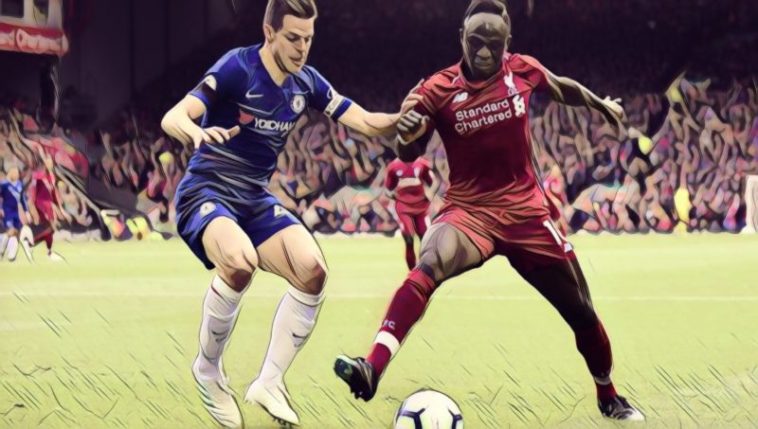 Super Sunday games don’t come much bigger than Liverpool v Chelsea in April, with just a handful of games to go and a league title on the line for the hosts.

It’s a fixture that evokes emotive memories of epic Champions League sparring, Rafa v Jose, Gerrard’s slip and two sets of fans without too much time for each other. It was ultimately Liverpool who took a deserved 2-0 win from a thoroughly entertaining match at Anfield between two excellent sides. Here’s a look at five things we learned from the action.

Chelsea come with containment in mind

Maurizio Sarri appears to have finally learned from those heavy defeats on the road earlier this season. Chelsea came to Anfield with a dogged defence and big numbers behind the ball as opposed to some of the charitable openness that we’ve seen in other games.

They did well to contain Liverpool’s wide men and restricted the home side to just a couple of half chances in the cagey opening exchanges. They also played well on the counter-attack but where held back by inferior numbers in the box when their creative players were looking for a target. With Giroud and Higuain on the bench, you have to wonder whether one of them would have made a bit of a difference to the direction of this game.

Liverpool needed big performances all over the park today and duly got one from their skipper. Jordan Henderson has been excellent of late, having been freed up in an advanced role. He was outstanding and had a helping hand in both goals.

A direct assist for Mane and a clever run to open up some space for Salah’s rocket, capped off an all action display which had the Liverpool faithful on their feet. The England international was everywhere for his side, barking orders and demanding more from everyone around him. He has stepped up of late, and looked a real leader at a crucial time for his team.

There was more about Liverpool as they came out for the second half with the bit between their teeth. The Reds went at their hosts, and benefited from Jordan Henderson making more intelligent and frequent bursts into the number 10 positions to open up a bit more space for his colleagues.

The breakthrough came by virtue of the excellent Henderson’s dinked chip to the back stick and on to Mane’s head who had the entire goal to aim at. The Senegalese made no mistake as the Kop found it’s voice.

The second was a magnificent, goal of the season contender from Mo Salah. Picking the ball up on the right from a Virgil Van Dijk pass, the Egyptian won himself some shooting space, before driving the ball with venom, power and precision from circa 30 yards, into the top bin leaving Arrizabalaga with no chance of getting anywhere near it. Words don’t do this one any justice!

After a somewhat flat opening 45 minutes, the game sprang into life after Salah’s goal and it was truly end to end for a good 10 to 15 minute spell.

Sarri’s men deserve credit for the way they reacted to going two goals down, and will feel Hazard’s effort which slammed the post, before being hacked clear on the hour mark, was a massive moment. Hazard had another excellent chance, just moments later drawing a close range save from Alisson as the game really livened up.

Chelsea have capitulated at times this season and although they were kept at arm’s length by Liverpool for the final 15 minutes, they can take some comfort from the fight shown by their players. They will feel though that Hazard should have been out wide much sooner as he caused Alexander-Arnold quite a bit of grief after Higuain’s introduction on 56 minutes. He really does give this Chelsea team so much, even at 2-0 down you feel they are never out of anything with the brilliant Belgian on the pitch.

For all sorts of reasons this is was a massive fixture for Liverpool. Their fans are still haunted by that costly 0-2 defeat in 2014 when they were just three games from the title with their destiny in their own hands.

Gerrard’s horrible slip and Chelsea fan’s lauding of that moment ever since, have stung this proud football club but today was a massive tonic for those years of pain.

A first home win against Chelsea since 2012 keeps Liverpool matching Manchester City blow for blow in this epic title chase. The reaction of the players, manager and the fans after this game tells you everything you need to know about the gravity of this game.