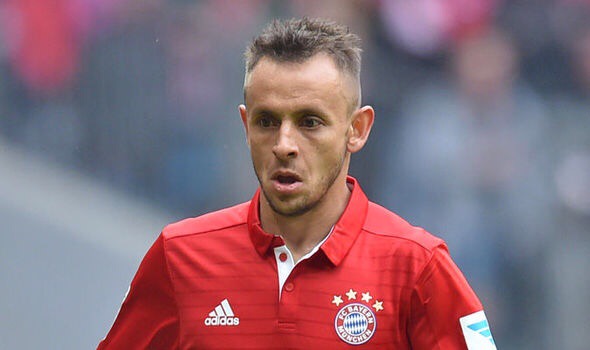 Bayern Munich’s Brazilian defender Rafinha has declared he is open to a move to the Premier League, amid interest from Liverpool and Arsenal.

Speaking in an interview with Four Four Two magazine, the 31-year old revealed that he has a number of offers from the English top flight as he considers his future at the Allianz Area.

“I don’t like to talk about offers – I have managers for that. But it’s true, those offers are real”

“I have a few offers from Premier League clubs. I’d rather not say [which clubs] because it’s confidential. I’m playing for Bayern Munich, one of the greatest clubs in Europe. I’m very happy here, but I am also happy to know that there are other clubs interested in my work.”

“It’s not the first time that something like that has happened. Obviously, every player is fascinated by the Champions League. I would like to learn another language. Why not?”

“I always follow the Premier League matches. It’s very exciting watching a tournament where six or seven teams can fight for the title. It’s probably the best league in the world.”

The Brazilian has spent twelve years playing his trade in the Bundesliga, firstly at Schalke, before moving to Bayern Munich six-years ago.

However, following the Germans’ struggles in Europe this season, it could be a summer of massive of upheaval at the Allianz as they look to get back to the top of the European game. Xabi Alonso and Philip Lahm are set to hang up their boots, and with Rafinha seemingly willing to move on, you can imagine Bayern Munich will be splashing the cash this summer.

Rafinha has also been linked with a move to Juventus.

Would you take Rafinha at your club? Can he be a success in the Premier League if he does decide to move? Leave us a comment below.