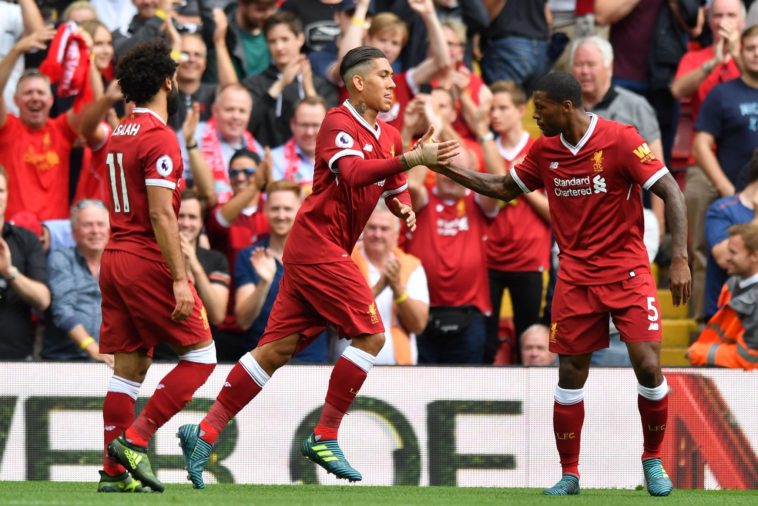 Liverpool were 4-0 winners at Anfield against a dreadful Arsenal side.

Liverpool’s front three and substitute Daniel Sturridge ruthlessly punished a sloppy Arsenal side to record their second victory of the season.

In an open game, Liverpool could have been ahead within 10 minutes. Emre Can played an excellent ball across the six yard box but Mo Salah’s effort was thwarted by Petr Cech who sprinted to the back post and spread himself to keep the scores level. Cech made a great save but Salah should have scored.

Arsenal were punished soon after when Joe Gomez’s perfectly weighted cross was headed in by a completely unmarked Roberto Firmino to give Liverpool a deserved lead. Once again Arsenal’s defence was non-existent. Rob Holding and Laurent Koscielny simply watched Firmino ghost in between them and head home.

Firmino was involved once again as he laid the ball on for Sadio Mane who cut inside and curled his effort into the far corner past the outstretched Cech. The Senegalese striker became the third Liverpool player, after Robbie Fowler and Daniel Strurridge, to score in the first three matches of a Premier League season.

Arsenal looked completely disjointed. As good as Liverpool were, Arsenal were incredibly poor and seemed like a team that were playing together for the first time. The Gunners didn’t even register a shot on target in the first half.

Liverpool picked up where they left off in the second half and continued to run Arsenal ragged. Salah was denied by Cech once again in the 55th minute but he did eventually get the goal that his performance deserved.

The Reds were defending an Arsenal corner when they scored their third goal. Hector Bellerin was easily dispossessed by Salah who raced clear and finally beat Cech at the the third attempt.

Mane nearly had his second goal of the match when his shot squirmed under Cech but Bellerin slid in to clear off the line. Daniel Sturridge came off the bench to compound Arsenal’s misery. He was unmarked as he rose to meet Salah’s cross at the back post and complete the rout.

Liverpool were excellent against an Arsenal side who just didn’t turn up. Wenger’s decision to start Danny Welbeck over Alexandre Lacazette did not pay off and Alexis Sanchez, making his first appearance for Arsenal since the FA Cup Final, looked completely fed up and frustrated.

Jurgen Klopp’s side kept a clean sheet in their fourth Premier League game at Anfield and his decision to rest Mignolet paid off.

Arsenal, meanwhile, have plenty to work on after a shambolic performance. Some things never change.