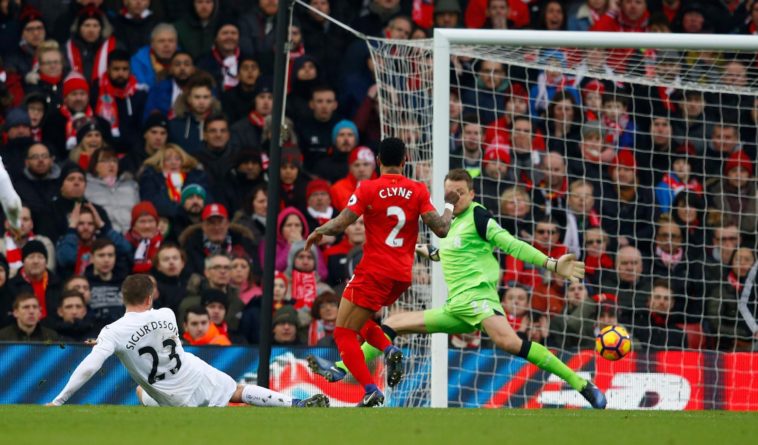 A shock result at Anfield in today’s lunchtime kick off as bottom side Swansea beat title challengers Liverpool on Merseyside.

It was an early kick off at Anfield and an early start for the travelling Swansea supporters due to the game being shown on live TV, but it was certainly worth the early start as they shocked Liverpool in a five goal thriller of a second half.

Liverpool came in to this game after a long trip home from Plymouth on Wednesday night so not much space between the games but this should not have any impact on today`s game as only Coutinho was in the first eleven today from the team who started against Plymouth. Swansea on the other hand had a full seven days to recover from the 4-0 home defeat to Arsenal last week.

Swansea came in to this game as the bottom placed team in the Premier League and with one of the poorest defences in the league, conceding 49 goals.  Liverpool on the other hand went into the game 3rd in the table with one of the better attacks, scoring 49 goals so far.

It was a cold day on Merseyside and Liverpool played towards the Anfield Road end in the first half, the crowd were a bit subdued not sure whether that was because of the early kick off or the feeling that this one was in the bag.

Liverpool had a lot of the early possession and Can should have scored, he was quite possibly offside but it was a real early chance. Both teams were quite confident and knocked the ball about with lots of movement with Liverpool pressing to win the ball back which saw nice work by Firmino to win a corner, and a great tackle by the touchline from Lovren to set up a quick break involving Coutinho and Lallana, the final ball from Lallana wasn’t good but it was looking promising for the reds at this point.

After 15 mins the possession stats were 75%-25% in Liverpool`s favour, and Lallana could have opened the scoring when he tried a spectacular over head kick which went narrowly the bar. Almost immediately, Swansea hit the post after an effort from Tom Carroll which took a deflection off Lovren and hit the Liverpool post with Mignolet beaten.

The next thing of note was in the 32nd minute when Mawson made a great block from a good Firmino shot, and Firmino was again involved shortly afterwards when he was found with a cross from Lallana. He stretched to reach the ball and his header went just over the bar

The first half ended 0-0 and as the second half began and the expectation was the Klopp`s half time chat would spark some life in to Liverpool. However, that expectation soon changed to disbelief as Swansea pushed forward. Lovren looked lost and gave a corner away, which resulted in a goal for Swansea. A scramble in the box and the ball eventually fell at the feet of Fernando Llorente who toe-poked the ball past Simon Mignolet to make it 1-0 to the visitors.

Four minutes later, it was 2-0. Phillipe Coutinho was in the Swansea box and in a good position to shoot but instead chose to pull the ball back which was a wasted opportunity to get an equaliser. Swansea broke up field and following a great cross from the winger Llorente rose to head a powerful header in to the back of Liverpool`s net.

Liverpool pulled one back there minutes later following an equally good header from Firmino. A superb cross from Milner found the Brazilian who headed home to make it 2-1. What a start to the second half, three goals in nine minutes and the crowd were a bit more vocal now, and this increased again when a few minutes later Sturridge replaced Coutinho.

The tempo increased, and it was all Liverpool and the Reds got their just rewards on 69 minutes. Wijnaldum held the ball up well and sent over a nice cross. Firmino chested it down and smashed the ball in to the Swansea net. A great goal. There were 20 minutes left plus injury time and the Liverpool fans were expecting their team to go and get the winner.

The hope and expectation was short lived though. Five minutes after the equaliser, Liverpool were chasing the game again. Fine work by debutant Tom Carroll saw the loose ball run through to Sigurdsson on the left of the goal and he hit his shot into the opposite side of the net giving Mignolet no chance, 3-2 Swansea.

Liverpool tried to create chances and pushed forward in search of another equaliser without success and Swansea hung on to record a famous victory and their first ever at Anfield, what an important result for both teams but for different reasons. Swansea will move out of the bottom three and on this performance surely won`t get relegated and by contrast, if as expected Arsenal beat Burnley tomorrow, Liverpool will move out of the top three, and potentially ten points behind leaders Chelsea.

Liverpool have again shown they are vulnerable in defence and whilst we have the good news about Matip finally being cleared to play by FIFA we still need another defender to boost the squad. Liverpool do have a good record against the top teams this season, but we also need to beat the lower sides as well, especially at home if we are to maintain a serious challenge.

I`m sure Liverpool will learn from this and re- group for Wednesday`s semi final second leg against Southampton so still a lot to look forward to and be positive about.

As for Swansea, the result takes them off of the bottom of the table and will give them real belief in their fight for survival.