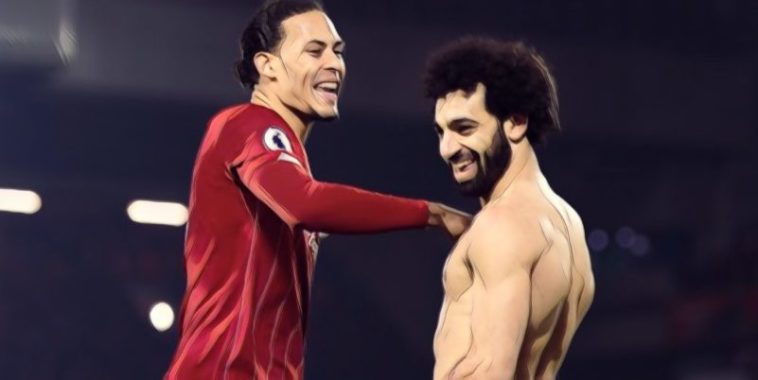 Liverpool extended their lead at the top of the Premier League table to 16 points, as they close in on their first league title in more than 30 years, with an enthralling victory over Manchester United.

In what was a frantic game played at a tremendous pace, Liverpool secured their 21st win from 22 Premier League games this season courtesy of a towering Virgil van Dijk header and a last-minute Mohamed Salah strike.

Wasn’t forced into any spectacular saves, nor was he tested from many United deliveries, but when he was called upon, his consistently excellent positioning kept the difficulty of saves very low. Also registered an assist in the final minute, always a pleasant bonus for a goalkeeper.

United did well to restrict the full-back from being in many dangerous crossing positions, clearly identifying his incredible ability from these areas as a threat. However, his deliveries from set-pieces were on point throughout, and ultimately led to him adding another assist to his large collection for the opening goal. Not overly tested defensively.

Fantastic header to open the scoring and typically imperious defensively, dominating Martial throughout, causing the Frenchman to drop deeper to look for the ball.

Looked shaky on the ball in the opening stages, but grew into the game, and by the end of it looked very comfortable alongside Van Dijk. Caught napping when United created their best opportunity in the second half through Martial.

Whilst he did provide a constant outlet on the left-hand side in the opening 60 minutes, he was unusually wasteful in possession and his crossing failed to cause United any problems. However, dealt comfortably with an out of sorts James.

Superb throughout. Screened the back four with the help of the two more mobile players around him and distributed the ball excellently from deep areas. At the heart of Liverpool’s relentless pressure early in the second-half and was unlucky not to score when he shot from the edge of the area cannoned back of the post.

Another energetic, inventive and physically relentless performance from the Dutch midfielder. Was absolutely everywhere in the first period, knitting Liverpool’s moves together and running himself into the ground. A key component in Jurgen Klopp’s winning machine.

Eventually got the goal that clinched the three points late on, finishing coolly in the 93rd minute from Alisson’s long punt forward. Missed a huge chance early in the second-half and struggled to impose himself throughout the game, giving the ball away on several occasions in the final third. The goal saved him from what a somewhat below-par performance.

Typically inventive when dropping off into the pockets and looking to create. Scored an excellent goal that was disallowed, but other than that he’ll be slightly disappointed not to have scored with some of the opportunities he was presented with.

Lively as always, linking up well with Robertson throughout, causing Wan-Bissaka and Lindelof several problems down United’s right hand side. Could well have scored when played in by Salah in the first-half, but was often Liverpool’s greatest threat with his pace and direct approach.

Came on and kept it simple in possession as Liverpool attempted to grind out the three points. Did this relatively effectively despite being caught out on the ball on a few occasions.

Cut a frustrated figure in the Manchester United goal as he was left exposed throughout. Perhaps a bit lucky to get away with Firmino’s goal being ruled out as he demonstrated his flaky side when challenging for a high ball against Van Dijk. However, a couple of excellent saves, one from Henderson and one from Mane, ultimately kept United in the game. Can’t be blamed for either goal.

Looked very uncomfortable when he was on the right-hand side of the back three. Pulled apart by the movement and pace of Mane. Very sloppy in possession.

Not his greatest game in possession, particularly in Liverpool’s best periods, struggling to progress the ball from deep. Also struggled with Liverpool’s dynamic movement and fluidity in the final third.

In the circumstances, playing in a makeshift role in a back three, at arguably the hardest ground to play at in the league, this wasn’t a bad performance. Did reasonably well in his battle with Liverpool dangerman Salah, although had to go off late on due to cramp which will once again raise concerns over his fitness.

Whilst he was pretty comfortably defensively in the first-half, he was deployed as a right-wing back, so there should’ve been an emphasis on him providing more offensively. In the second-half he appeared to be fatigued and positionally lost all discipline, leaving Lindelof exposed to Robertson and Mane.

Didn’t provide the United back three with the protection they needed. Used the ball with mixed efficiency, often playing loose forward balls when trying to relieve the Red Devils defence of Liverpool’s pressure. Struggled with the Merseyside team’s mobility and intensity in midfield.

Whilst defensively not always helping Matic with protecting the United back three, he was at the heart of most of their attacks, inventive in his passing and driving his side forward with powerful, incisive runs.

Deployed as a left-wing back and looked slightly uncomfortable on his weaker foot at times. Oddly charged with nullifying Liverpool’s main aerial threat in Van Dijk from a corner and inevitably this led to the Dutchman heading in the only goal. Looked bright on occasions in the first-half, looking to be positive on the ball but largely struggled with Liverpool’s intensity.

Wasted several good first-half opportunities on the counter with poor passing and decision making. Went missing in the second period when United were under the cosh and was eventually substituted for this ineffectiveness.

Within the opening five minutes he had wasted two good opportunities to play Martial in, and didn’t seem to recover from that point. Sank under the cauldron of the Anfield atmosphere, struggling to impose himself on the game. Perhaps too much reliance on him to create and pose a threat for such a young and inexperienced player.

United’s most threatening attacking player, despite missing their best chance of the game when lashing over mid-way through the second-half. Struggled early on centrally up against Van Dijk, so started dropping deeper and wider to collect the ball before linking up well with players.

Brought on to try bring more quality in the final third, but was unable to affect the game.

Struggled to get into the game and perhaps could have done better from an excellent Martial cross.