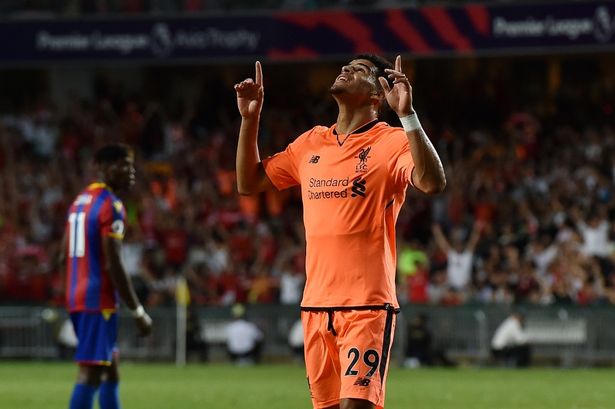 Liverpool defeated Crystal Palace 2-0 in the semi-final of the Premier League Asia Trophy; here are five things we learned.

Crystal Palace’s new manager, Frank de Boer, has brought with him a new style of football. Fans were able to see it in action as they took on Liverpool but may have been left disappointed. The 3-4-3 formation (similar to Chelsea) didn’t seem particularly easy for the players to adapt to.

The typically Dutch passing football also didn’t suit many of the players. The back three of Palace are much more physical players than technically gifted. Therefore they struggled to initiate the attacks that de Boer was looking for.

Christian Benteke will also have been left frustrated. The quick passing did not suit his playing style at all and he struggled to get in to the game. The lack of crosses in to the box restricted his aerial threat which resulted in Benteke’s only chances coming from corners.

With Nathaniel Clyne injured, Trent Alexander-Arnold has been given a huge opportunity to show that he deserves a chance in the first team. At just 18-years-old he has bags of potential and could secure the right-back spot for a long time to come.

Alexander-Arnold spent much of his youth career as an attacking midfielder and as such has a lot of attacking quality. However there were questions marks over whether he was good enough defensively to take the starting spot from Clyne. Despite those apprehensions he dealt with the quality of Wilfried Zaha very well – something which many right-backs have struggled with.

In the short time Mohamed Salah has been with Liverpool he has already impressed. Before the Crystal Palace game he had only played 45 minutes against Wigan where he scored on his Liverpool debut.

He played another 45 minutes against Palace and while he didn’t get on the scoresheet this time, he looked very lively. Salah tormented Schlupp and Delaney with his pace, beating them time after time. Premier League defenders will now be very aware that if they give Salah too much space he’ll cause them a lot of problems.

Wilfried Zaha spent much of the game up against Alexander-Arnold with the Liverpool youngster dealing with him fairly well. However, Zaha was comfortably Crystal Palace’s most threatening player.

Crystal Palace rarely got forward against Liverpool but when they did it was almost a certainty that Zaha would be the one causing Liverpool issues. Zaha’s quick feet and lightning pace provided Palace with their best chances in the match. It is difficult to see Zaha being at Palace for longer than one or two more seasons.

Liverpool, Crystal Palace, West Brom and Leicester City were all invited to play in the Premier League Asia Trophy. The cup is being held in Hong Kong and has caused all four teams problems.

The unpredictable weather and torrential rain has forced the teams to spend much of their time training indoors. When they have been able to train outside it has been at hastily organised venues. This is because the pitch at the Hong Kong Stadium where the tournament is being played has been waterlogged.

In the first match between West Brom and Leicester City the lack of training time was evident as both teams looked sluggish. After a 1-1 draw Leicester City booked their place in the final following a new penalty format.

Rather than each team taking penalties in-turn a new ‘ABBA’ style has been used. The ‘ABBA’ style means that team A take a penalty first followed by two team B penalties and then another team A penalty. That ordering is then repeated.

The result of that unusual penalty shootout means that Liverpool will play Leicester City in the final.