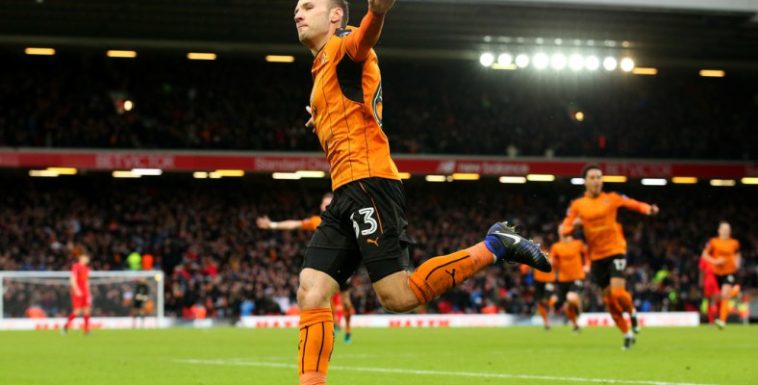 Wolves caused yet another Anfield shock as they ran out 2-1 winners with a famous FA Cup victory to put themselves in the hat for the next round.

Liverpool were looking to put recent home defeats behind them and fielded a mixed team of youth and experience, perhaps with one eye on the Chelsea game in midweek, but there were only three youngsters in Randall, Woodburn and Ejaria. Wolves currently sitting at 18th in the Championship are clear of the relegation zone and out of reach of a play- off position were looking forward to the distraction of the FA Cup, as indeed were the travelling army of fans who filled the Anfield Road End.

Early start for the visitors

Wolves took the lead within the first minute to silence the Kop, with the eventual man of the match Helder Costa floating a lovely free kick to the far post which was met by the unmarked Richard Stearman who headed past Karius in the Liverpool goal. Early questions about Liverpool`s inability to defend and organise themselves properly.

Liverpool passed the ball around patiently trying to find a gap without success as the Wolves defence stood firm and a familiar pattern developed with Liverpool passing the ball to the wing from the centre and then back to the centre as they struggled to find a way through.

Wolves relied on breaks and in the 10th minute they should have been 2-0 up. Costa broke from his own half, evaded a few chasing defenders but scuffed his final shot and sent it wide of the Liverpool goal.

Liverpool had 80% possession to Wolves 20% after the 20 minute mark but no chances created, with only a weak Firmino shot and a half hearted appeal for a penalty by Wijnaldum as the only real opportunities to speak of in the first half.

Wolves continued to frustrate Liverpool and another break away led to them to doubling their lead before the half time break. Again it was Costa who raced clear and just as he was being closed down by the Liverpool rear guard he cleverly put the ball through to the on rushing Weimann who calmly rounded the Liverpool keeper and put the ball in the Liverpool net.

Half time. 2-0 to Wolves and as the teams left the field, there wee a few boos from the home fans, clearly unsatisfied at the performance and scoreline.

Klopp made one change at half time with Coutinho coming on for the ineffective Randall. Liverpool started the second half much the same as they played for the first half with patient build up play, with no real chances. The first effort of any note was in the 60th minute with a speculative long range effort from Coutinho.

Can and Sturridge were introduced to change things around a bit and have a bit more experience on the pitch and as the game entered the closing stages Liverpool`s play became a bit more urgent. But still no real chances were created.

Appeals for penalties were rightly waived away following challenges on Woodburn and Lucas, and in between this Karius was forced to make a good save from the Wolves substitute Bodvarsson.

In the 86th minute Origi pulled one back after smashing in at the far post after a clever ball across the box from Sturridge. The Kop believed.

The final few minutes were frantic and Origi spurned another chance to equalise at 2-2 when he forced a good save from Wolves` 20 year old stand in goal keeper Burgoyne. Wolves didn’t sit back and indeed could have scored a 3rd following a great run by Bodvarsson who`s goal bound effort hit Lucas before going wide.

The match ended with a deserved 2-1 victory to Wolves who now progress to the next round, much to the delight of the travelling fans behind the goal. The man of the match was awarded to Helder Costa who I am sure that Wolves will be looking to make his loan from Benfica more permanent.

Liverpool now face Chelsea at home in the Premier League, having now lost 3 home games on the run, and having not lost 4 consecutive home games since 1923.

In my article of 19 January “The next 4 games are vital” I had even suggested Liverpool could win them all, how wrong could I have been?