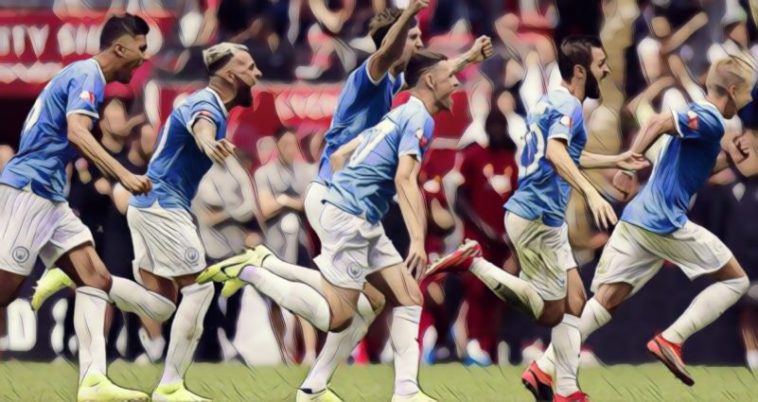 Despite the friendly nature of the match, Pep Guardiola’s all-conquering champions were looking to get a psychological advantage over their opponents who ran them so very close throughout all of last season in the Premier League title race.

In a pulsating clash, there was nothing to separate the sides after 90 minutes and the game went to penalties with Man City just edging out Liverpool 5-4 to lift the Community Shield. Here’s a look at five things we learned from the action.

It only took City 12 minutes to take the lead, via a Raheem Sterling toe-poke from close range. It was the England international’s sixth goal in his last four Wembley outings. However, his team could have broken the deadlock even earlier than that, after getting plenty of joy from Liverpool’s high line.

The Reds were uncharacteristically sloppy and sluggish as their defensive high-line was caught out on multiple occasions in the early exchanges. Claudio Bravo was particularly effective with his laser-guided long balls causing problems, particularly down Liverpool’s right flank. Leroy Sane missed a couple of decent chances after cutting in from the right and taking advantage of Reds shaky positioning.

It was a theme that continued for most of the first half and into the second. Kevin de Bruyne and David Silva’s confidence grew as they found their teammates in and around pockets of space behind Liverpool’s line. Only when Joel Matip came on, and Joe Gomez shifted to right-back, did Jurgen Klopp’s men look less vulnerable.

Man City intensity has Liverpool on back foot

Pep Guardiola’s side were well and truly up for this one and got right into Liverpool’s faces early on. The champions only had four pre-season fixtures coming into this match, but they looked sharper and hungrier than Liverpool as they won the midfield duels throughout the first half.

City’s £63 million man, Rodri looked neat, tidy and disciplined on his debut. The Spain international slotted in naturally to the number six role and allowed his team mates to flood forward and cause havoc on Liverpool’s defensive lines.

Leroy Sane dealt cruel blow after being given chance to impress

Pep Guardiola will be disappointed to see his German winger last just 13 minutes of this match, having handed Leroy Sane a chance to impress at Wembley.

The 23-year-old has been linked with a big-money move to Bayern Munich all summer, but was afforded a place in the starting lineup on Sunday afternoon. A heavy tackle by Trent Alexander-Arnold saw the winger hobble off in what could be a big blow to his prospects of first-team football going into the new season.

With his future up in the air, it was the last thing the Germany international needed, having featured in three of City’s four matches in pre-season.

A year on from suffering a horrendous knee injury in the Community Shield last time out, City’s Chilean number two put in one hell of a shift at Wembley, to keep his team in the game.

The 36-year-old was doubtlessly boosted by Mo Salah’s bizarre hesitancy in front of goal, but he still did all he could for his team on a busy Sunday afternoon.

He recorded eight big saves in the 90 minutes and produced what proved to be the match-winning stop in the shoot out from Gini Wijnaldum.

He was also very decisive off his line and effective with his kicking game as he looked to remind everyone that he is still a decent option for City this season, as they look to defend their domestic treble.

Liverpool clicked into gear in the second half as they began to take the game to their opponents. Man City were on the ropes as the Reds pressed hard and began to win a lot more second balls and create openings down both of the Citizens wide areas.

Surprisingly though, it was Mo Salah who failed to break the deadlock for Liverpool. The usually potent Egyptian was indecisive as he spurned 10 of Liverpool’s 17 chances in the match. Oddly, he continuously favoured Bravo’s near post and fluffed his lines when clean through in stoppage time, although Walker’s acrobatic clearance on the line was pretty heroic to be fair.

You can likely put Salah’s poor finishing, down to pre-season rustiness, but Liverpool fans will hope he is a lot more lethal on Friday night as Norwich visit Anfield and the season begins in earnest.

Read: Five of the best games between Klopp and Guardiola sides