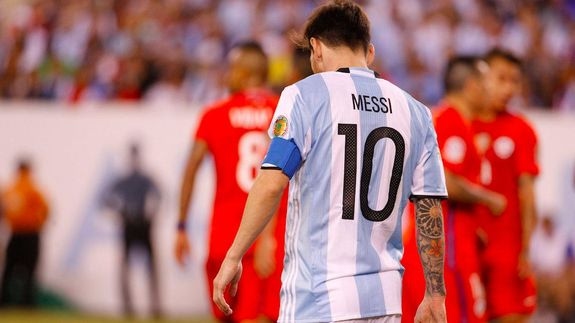 Huge news this morning as Lionel Messi has announced that he will be retiring from International football in the wake of Argentinas latest Copa America final defeat.

Argentina lost 4-2 on penalties in the final against Chile, after the game finished 0-0 after extra time. Messi stepped up in the shootout and missed his spot kick, and speaking to Agentine TV after the game, Messi said:

It’s not meant for me. For me the national team is over. I’ve done all I can, it hurts not to be a champion

It’s been four finals, I tried. It was the thing I wanted the most, but I couldn’t get it, so I think it’s over,” he added.

It’s very hard, but the decision is taken. Now I will not try more and there will be no going back.

Manchester United goalkeeper Sergio Romero said he hoped that Messi, who became his countries all time leading goalscorer at this tournament, would “reflect” on his decision.

Messi has scored 55 goals in 113 appearances for his country, despite only being 28, but has never won a major International trophy.

Argentina recently missed out in the 2014 World Cup final in Brazil, losing out to Germany.