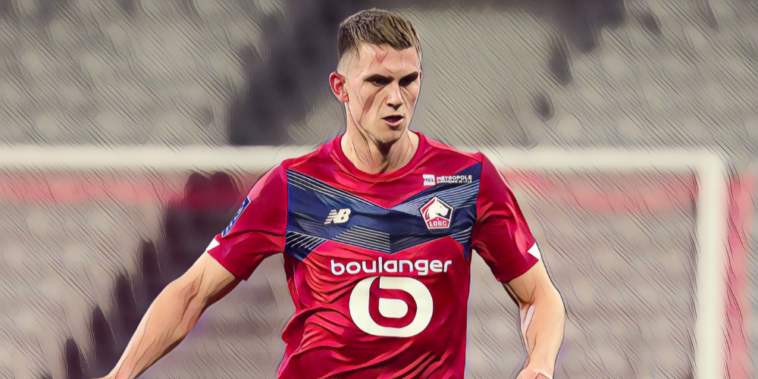 Lille defender Sven Botman has revealed his ambition to play in the Premier League amid reported interest in his services from England’s top clubs.

Botman has been linked with a move to the Premier League in recent months following an outstanding debut season with Lille, the centre-back having impressed for the Ligue 1 league leaders since signing from Ajax.

The 21-year-old’s performances have helped Lille to the top of the division with just one game of the season remaining, one point ahead of defending champions Paris Saint-Germain ahead their season finale at Angers on Sunday.

Manchester United, Liverpool, Arsenal and Tottenham are all reportedly admirers of the towering defender, who admits interest from abroad is a ‘good compliment’ following a season of huge progress since moving to France.

“It is a good compliment when you hear these clubs are interested,” he told The Athletic. “I’m lying if I say it’s not interesting me — it’s the first time such big clubs are linked to me — but it was early days, because in January I was only at Lille for half a season. It was nice to hear but I was focusing on Lille and I’m still doing this. After the season, I will enjoy a vacation and see what happens next.

“I’m not the kind of guy who is already planning for the future. How it’s going with me now, I hope to some day make a good step to a top competition or a big club; that’s my goal. But I’m good at the moment with Lille. I’m really enjoying this year, I’m enjoying playing a lot. I learn a lot and I still have to improve a lot. I’m not complaining about my situation right now, I’m happy at the moment.

“For my ambitions, yes, of course I want to achieve as much as possible. I hope to make a big, beautiful step for me. We’ll have to see in the future if that is possible or not.”

Botman has opened up on his influences and has named Sergio Ramos and Virgil van Dijk amongst the defenders he most admires, admitting he is keen to incorporate aspects of their game into his own as he strives to improve.

“I look a lot at Sergio Ramos, I like his attitude,” Botman added. “On the field, it’s like, ‘I’m the boss, everybody has to listen to me’. I think some attackers hold back a bit because of that confidence.  [Winston] Bogarde had the killing attitude, ‘Nobody will dribble past me’. I learned a lot from this mentality.

“I am very amazed by Virgil van Dijk, because of his body. It’s like the same as me and he is really fast. I like to see how he works with his body and how he plays against small strikers, like Sergio Aguero. I remember last season he had a record for how long an opponent didn’t pass him. For his size, it’s amazing — top performance. I have a mix of these three things those players have.”