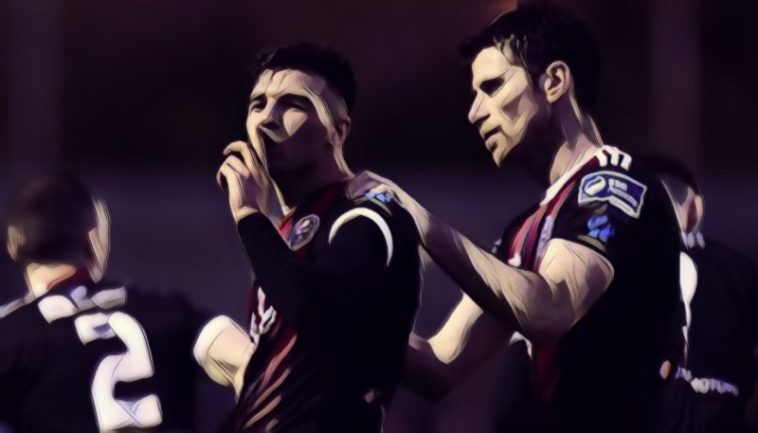 One of the sharpest saves you’ll see all season to deny James Finnerty, who was almost celebrating as he connected with Danny Mandroiu’s corner. Saved a Dinny Corcoran penalty in the second half but unfortunately could do nothing about Danny Mandroiu’s outstanding free kick. Top performance.

What looked to be a tough night ahead, with the pacey Danny Grant and Luke Wade-Slater switching sides throughout, the Saints right back had an excellent game and going in both directions too. Got forward to support his front two of Shaw and Drennan and had a good battle with Darragh Leahy on a couple of occasions.

A clean sheet and scored the crucial opener against a revitalised Cork City that swung the game in his side’s favour and in truth, once the deadlock was broken The Champions never looked back. Was sharpest to react to Patrick McEleney saved shot and dealt well with whatever The Leesiders threw at him, whether it was the creative James Tilley or young Daire O’Connor bombing on.

A man mountain at the back for Pats as they battled bravely against Bohs. Kept Dinny Corcoran quiet throughout and the disappointment of missing out on a clean sheet was evident at full time. Another body-on-the-line performance and looked a threat at every set piece in the opposition’s area.

Had to deal with the not so familiar threat of facing a two-man attack in the lively Mikey Drennan and the powerful Gary Shaw. Had a really intriguing battle with Drennan in the first half and put in a fully committed-to-the-cause style performance. Was unlucky to see his smashing header brilliantly tipped over by Clarke, but yet another real find by Keith Long.

Had to get him in the team, despite his late sending off. Another excellent performance from the Mayo native in his sides huge clash with old rivals Cork City. Scored a well-taken header to seal the three points at Turners Cross as his side sealed their sixth consecutive win over Cork and look in ominous form.

With Forrester and McCabe on the bench, the pressure was on the Pats midfield to perform and the Ireland under 21 international had an outstanding game on Friday night under the watchful eye of Stephen Kenny. Seemed to win everything around him on the ground and in the air.

Scored two, one from the penalty spot, and was instrumental in the winner that gave Harps their second win in a row against a very good Waterford side. The exciting 21-year old scored a peach of a free kick for his first, before slotting home a vital penalty to put his side 2-1 up.

Despite a late equaliser from Waterford, the all-action midfielder still found time and energy to go on a good run and  his pass set up Sean Boyd to make it 3-2, as Harps move level on points with relegation rivals UCD.

Scored one of the free kicks of the season so far to grab a vital point away at St. Pats. Stopping the run of defeats that threatened to derail their excellent start to the season. Looked a class above at times

But seriously, you don't save those! ??

His performance was described as rampaging on the left-hand side and caused UCD problems all night. Looks to be getting back into some good form, and gives this talented Rovers side some much-needed balance.

Although the newlywed didn’t score on the night, the big man was a handful all evening as Bohs struggled to get to grips with his physicality and turn of pace. Won every header that came his way and was vital in keeping possession for Harry Kenny’s troops as Bohs looked to press from the off. Set up the first goal for Darragh Markey with a beautifully floated cross from the right. An all round top class performance.

Darragh Markey wins the ball, plays it forward and continues running until he finds himself unmarked to head home Gary Shaw’s perfect cross. This a great goal from last night! #Saints2019 pic.twitter.com/eoJSlEOw2o