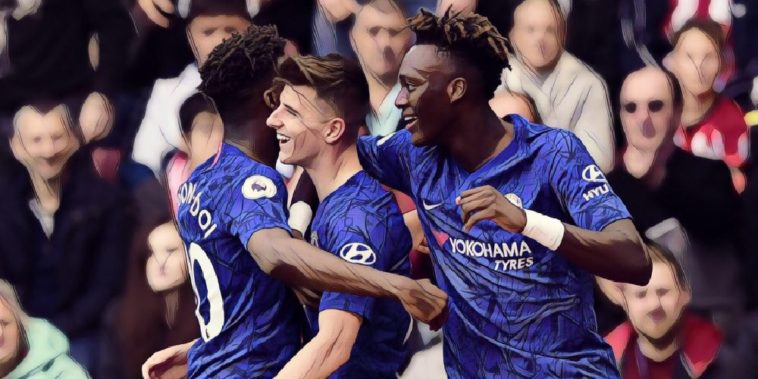 Frank Lampard’s debut season at Chelsea is nearing its conclusion and there is no doubt reason for increased optimism at Stamford Bridge, the west London side possessing an abundance of potential amid their ranks.

Lampard has widely been credited for utilising the club’s impressive youth system, fielding Chelsea’s youngest ever Premier League starting XI – including four academy graduates – for a fixture against Crystal Palace earlier this season.

No Chelsea manager has ever handed more first-team debuts to academy graduates in a single season than Lampard, and we’ve decided to assess the impact of five of the club’s homegrown heroes.

Here are our ratings of five of Chelsea’s academy graduates this season:

Mason Mount spent last season under the guidance of the now Chelsea manager at Derby County, with the midfielder’s performances in the Championship convincing Lampard he was ready for the Premier League following his appointment at Stamford Bridge.

The youngster started the season brilliantly with two goals in his first three Premier League games, and has remained a key figure in the Chelsea side throughout the course of the campaign.

Only Cesar Azplicueta and goalkeeper Kepa Arrizabalaga have played more league minutes than the 21-year-old, who has also made an impression on Gareth Southgate to establish himself in the England squad, earning six caps since his senior debut in September 2019.

Mount combines a tireless work-rate with creativity and goal threat, scoring six goals and providing four assists in the Premier League this season. The midfielder is likely to come under increased competition for places next season as Chelsea invest in their squad, but he has shown enough following his breakthrough to indicate he can be a fixture in the squad for seasons to come.

Another player who spent last season alongside Lampard at Derby, Tomori was named as the Championship side’s Player of the Year before returning to Chelsea last summer.

The centre-back began the season brightly, impressing on his debut against Sheffield United in the fifth fixture of the season before featuring regularly, and scoring a Goal of the Season contender with a stunning long-range effort against Wolves in September.

Tomori’s recovery pace and passing out from the back earned the 22-year-old plaudits and he made his senior England debut against Kosovo during the opening months of the campaign, but the second half of the season has disappointed following its initial strong start.

The youngster has fallen behind the likes of Kurt Zouma and Andreas Christensen in the pecking order, with speculation suggesting Tomori could be allowed to leave the club on loan should the Blues secure the signing of an additional centre-back this summer.

Tammy Abraham returned to Chelsea this summer following his third loan spell away from the club, the forward having fired Aston Villa to promotion to the Premier League following a prolific season in England’s second-tier last term.

Handed the number nine shirt in Lampard’s new-look squad, the Chelsea boss placed his faith in Abraham’s ability to step up and was rewarded with a fine season for the 22-year-old.

Abraham has scored 17 goals in all competitions to cement himself as the club’s leading scorer, scoring 15 times in just 25 Premier League starts including a first top-flight hat-trick against Wolves.

Abraham’s previous spell in the Premier League was a difficult loan at Swansea but the striker has shown he has the quality to thrive at the highest level, scoring his first international goal in November after pledging his international allegiance to England.

The second-youngest Chelsea player to reach ten Premier League goals, the 22-year-old will hope for an increasingly influential role in the side next season despite losing his starting spot to Olivier Giroud recently and the confirmed capture of Timo Werner from RB Leipzig.

The fourth of Chelsea’s emerging academy graduates to have spent last season on loan in the Championship, Reece James cemented himself as a firm fans’ favourite during a hugely impressive temporary spell at Wigan Athletic.

James won the club’s Player of the Year, Player’s Player of the Year and Goal of the Season accolades before returning to Chelsea, where his pace, power and superb delivery have seen him emerge as another leading option amid England’s wealth of talent at right-back.

Amongst his season highlights include the dramatic equaliser in an incredible 4-4 draw with Ajax in the Champions League group stages, becoming the club’s youngest-ever goalscorer in the competition.

The 20-year-old has been a regular in the side ever since and looks the natural heir to club captain Cesar Azplilicueta, a boyhood Blue and modern attacking full-back with huge potential to improve in the coming seasons.

Arguably the most hyped of Chelsea’s talented academy graduates has become somewhat of an odd one out, Hudson-Odoi failing to make an impression in a difficult personal campaign.

After the speculation surrounding his long-term future, amid interest from Bayern Munich, was ended by the signing of a new – and greatly improved – contract, the winger has failed to kick-on after recovering from a serious Achilles injury,

The teenager’s breaching of lockdown rules and a brush with police has done little to boost his prospects, and Lampard will be hoping Hudson-Odoi can knuckle down and force his way into the side.

The England international has started just seven league fixtures with a further 14 appearances as a substitute so far this season, scoring once and providing five Premier League assists.

Hakim Ziyech’s arrival from Ajax and Christian Pulisic’s impressive debut season in English football means competition will be fierce for a wide berth in Lampard’s side next season, and Hudson-Odoi will be hoping to build on his vast potential following a frustrating 2019/20 campaign.