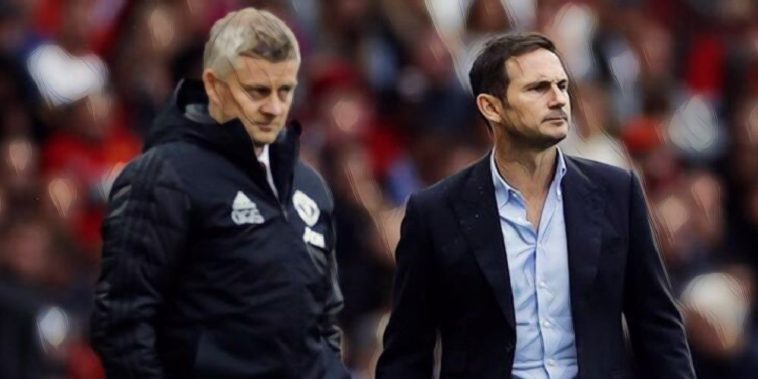 Chelsea manager Frank Lampard believes he and Ole Gunnar Solskjaer are judged differently given their status as former players of their respective sides.

Solskjaer has come under increasing pressure at Manchester United this week following the club’s early elimination from the Champions League, the Red Devils crashing out at the group stages following a 3-2 defeat to RB Leipzig in Germany.

It was the latest disappointing display from a side that has struggled for consistency under the Norwegian, who faces a crucial derby clash this weekend as United face Manchester City at Old Trafford.

Lampard refused to comment on the uncertainty surrounding Solskjaer’s future in charge, though expressed his belief that former players turned managers are treated differently to those without previous links to the club.

“We all have good times, bad times, this job is taxing and the last thing I’d want to do would be to make an opinion on Ole’s position – I think it’d be wrong,” said Lampard at his pre-match press conference.

“I suppose I can answer the question – when you’ve played for the club, I think people do look at it with a different viewpoint. I think in certain tough times it can be very casual and very easy just to refer back to the fact you were a player and that’s why you got the job.

“That can be used against you and all you do is try and work against that. Whether it’s myself, Ole, or anyone else in that position – it’s not just us two that have taken that path, there are other managers. That’s kind of just how I feel about it.

“But one thing you can’t do is complain about it – you just get on with your job and I’m sure that’s exactly what Ole is doing behind the scenes as I do every day here.”

Lampard’s side travel to Everton in the Premier League this weekend looking to extend their nine-game unbeaten run in the division, Chelsea currently third and two points adrift of both Liverpool and league leaders Tottenham.