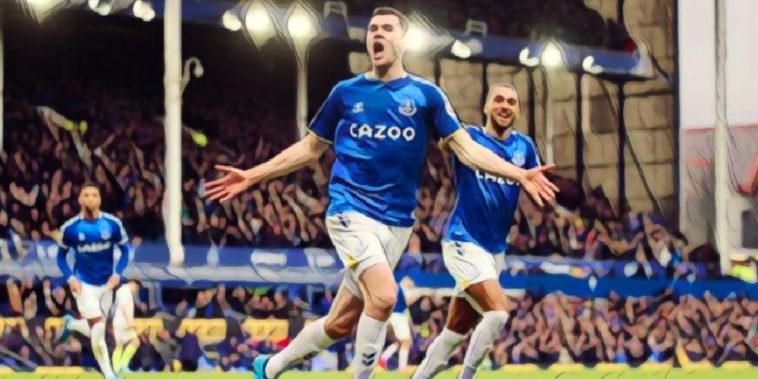 Everton grabbed a much-needed three points as they earned a 3-0 win over fellow strugglers Leeds at Goodison Park.

Frank Lampard had got his Everton tenure underway with a 4-1 win over Brentford in the FA Cup last weekend, though were given a reality check as they fell to a disappointing 3-1 defeat to Newcastle in midweek that sucked them into the relegation scrap.

Everton started by far the brighter of the two sides, and got themselves off to a great start, with Seamus Coleman giving his side the lead in just the 10th minute. Donny van de Beek’s low cross across the box was aimed towards Dominic Calvert Lewin, and while Pascal Struijk beat the England international to the ball, it popped up to Coleman who had continued his run into the area before heading past Illan Meslier.

Michael Keane then doubled the Toffees lead midway through the half, the defender producing a towering header as he thumped home a corner.

It was a thoroughly dominant display from the Merseyside outfit, and Brazilian forward Richarlison added some gloss to the scoreline with 12 minutes to play, receiving the ball inside the Leeds half, cutting inside onto his left before finding the bottom corner with a low strike into the bottom corner.

The result moves Everton within a point of Leeds, but more crucially, five points clear of Norwich in the drop zone and four clear of Newcastle.

Speaking afterwards, Frank Lampard was delighted with his side’s ‘attitude, aggression and work rate’, while praising loanee Donny van de Beek, who made his first start for the club since his loan move from Manchester United.

A great display in the heart of midfield. 💪 pic.twitter.com/lKRCGKzTaT

“It was nice! An incredible afternoon,” he told Match of the Day. “What we did today was something special in terms of the performance. It showed an attitude, aggression and work rate. The fans, when they see what the players are putting into the game… What they give us. It has to be the start.

“I can see the talent. Individually you go through the team and there’s ability in there. It was about being a strong unit and fighting for the fans. You have to be solid against Leeds. It was a great reaction, the fans would have enjoyed it – I certainly did. We need to use it for a base for where we want to go in the league.

“Relief is three points and the table looks slightly better this week but I’m just so proud of the performance. I haven’t seen a performance like that in the first half for, pfft… That has made me really happy. We need to build.

“I thought Donny van de Beek was great. To play like that at home – his calmness, work rate and intelligence was great. Dele Alli was active when he came on. There will be more from them both. They are great additions and I believe they will get better.

“I’ve had a lot of support since I came to this club. It’s humbling for me to have the fans supporting me so well.”